On Saturday, I woke up sad. I’d had a lovely time at the beach with old friends the day before, but for some reason (which I now blame on ragweed) Saturday morning brought with it a weepy sort of melancholy.

By Saturday night, my heart was full again. I was reminded what an amazing life I lead. And I didn’t even have to leave my house.

Sometime on Saturday afternoon, Jonah Knight emailed me to remind me of something I’d promised him a while back: that for two weeks I’d be sponsoring his new Twitch site, where he is now streaming live performances. 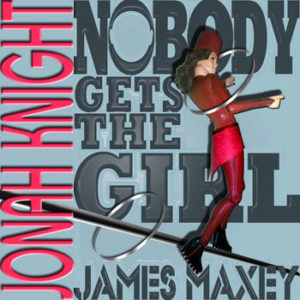 For those who might not remember, Jonah and I met at a Mysticon (Roanoke, VA) back around 2013. We had a mutual friend whose work we admired: James Maxey. In particular, James’s fabulous superhero classic Nobody Gets the Girl. I loved it so much, my blurb is still on the cover. Jonah loved it so much, he wrote a soundtrack for it.

So yeah…we were pretty much destined to be friends. He invited me to be a guest on his podcast. I saw him perform at a bunch of cons. And then he moved to California. BOO.

Of course, with all I’ve had going on this year, I’d totally forgotten about the promise I made him. (Surprise!) I immediately dropped everything, put my ducks in a row, got Jonah’s link, signed up on Twitch, and followed Jonah’s profile.

I also shared his most recent Facebook post, where he announced that he’d be performing a livestream event THAT VERY NIGHT. How fortuitous! I still had so much on my to-do list, but I could stand to do it all while watching/listening to one of my favorite people perform live, right? Why not?

So I tidied up a bit and lurked silently in the chatroom while Jonah warmed up. He already had visitors from Spain and New Zealand online. And he’s in California. And I’m in Florida. Instant global party!

I also worked on my art homework — Bianca has taken to giving me assignments, which I’m totally cool with. She told me to stop working on butterflies for a while and do something different like…chalkboard art! White pencil on black construction paper. Write some quotes in fancy handwriting. Doodle some things. But what was I going to draw?

Well…Jonah was right there, so I let him be my inspiration. I started writing down my favorite lines from his songs. I doodled rocket ships and robots and steampunk gears and stars. And it was wonderful. 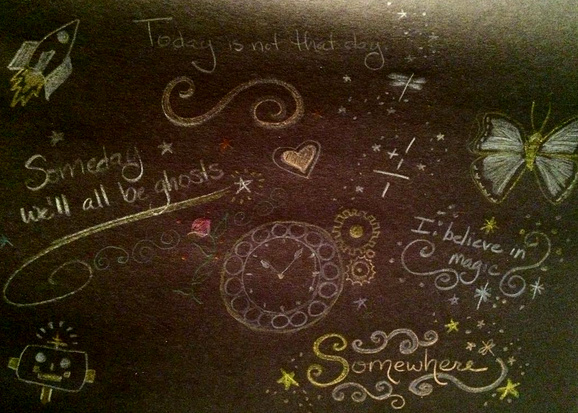 I didn’t jump in on the chat until he mentioned my name…and then we interacted in that 21st century way kids do — I spoke via chat, and he answered on the video. He even played “King of Nebraska” as the finale, which totally made my night. I danced around my kitchen and sang along with gusto.

Sometime in the middle of all that, it occurred to me to be present…to look at my life from an outside perspective and appreciate it for what it was. I started off having a crummy day, and ended it with a private home concert, during which the performer talked DIRECTLY TO ME and played me a song.

Even better? The video from that night is up on Twitch, so any of us can pull it up and watch it again. Be sure to follow Jonah — hang out with us for the next couple of weeks and win some things!

The world we live in right now is AMAZING. It’s a world in which Willie Wonka would have had a ball. We can have just about whatever life we choose, with a little bit of effort.

The magic is there. We just have to find it.