Hello, everyone, and HAPPY JULY!  I’d like to welcome you all to Princess Alethea’s third annual MONTH OF AUTHORS AND ARTISTS.

Kicking off things will be my good friend D.B. Jackson (aka David B. Coe), whose fantastic new book Thieves Quarry hits shelves TOMORROW. Thieves Quarry is the sequel to Thieftaker, a book I thoroughly enjoyed and reviewed here. I encourage you all to check out this series set in Revolutionary era America…a perfect setting in which to celebrate our Independence Day! *cue Bill Pullman’s rousing ID4 speech*

David will lead this month’s merry band of troublemakers by answering a round of questions unique to each year (with the exception of the Colin Harvey Memorial Question, which is asked every year in Colin’s honor).

So, without further ado…take it away, David! xox

David: Writing for me, is a continual process of discovery. I tend to outline my books and short fiction, so that I know where my narrative threads and character arcs are going, at least in a general sense. And yet, each day I write, I learn something new about my story, about my characters, about my setting. As my characters develop, mature, deepen, they become less creations of my imagination, and more independent beings who make choices and take actions that I can’t always anticipate, much less control. They grow in ways I don’t expect, and they bend my story lines to fit their emerging personalities. And so even as I craft my narratives, I also experience them as if for the first time, and that act of creativity is like constantly exploring the boundary of something new and mysterious. I never tire of it, and I’m never bored by it. 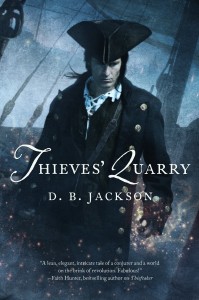 Princess Alethea: What’s the worst thing about writing?
Well, I never seem to know what’s going to happen in my stories . . . No, seriously, the worst part of it for me is probably the business end of the publishing industry. I am not only an artist, I’m also a businessman, a one-man promotion and marketing department, a guy who needs to decipher the legalese of contracts and understand grim terms like “sell-through” and “reserves against returns.” If I had my way, I would be able to leave all that stuff for someone else to deal with, and I would do nothing but write. But being a professional writer means having to take on both aspects of my job — the creative and the pragmatic. I don’t like it, but I recognize the necessity of it.

Princess Alethea: Finish this sentence: “Writing is like…”
Hmmmm. Writing is like making lasagna: It’s not pretty while you’re making it, but if you layer it right, and put in all the correct ingredients in the correct proportions, the results will be delicious . . . and good for you.

Princess Alethea: If you could write anywhere in the world, where would it be?
That’s a tough question. I love the desert and the mountains. I’ve lived in New England and loved it. I lived for a year in Australia, and fell in love with several parts of that country, as well as sections of New Zealand. But I would probably choose to write somewhere along the Oregon Coast, probably the north coast, near Ecola Point.

Princess Alethea: What’s your favorite type of tree?
Bristle-Cone Pine Trees. They are the oldest living things on the planet. You can find them in the White Mountains of California, an arid, unforgiving high-desert environment. They are gnarled, twisted by the wind, made spare by the unrelenting sun. And yet they are strange and beautiful and utterly fascinating to look at. Those would have to be my favorites.

Princess Alethea: What were you like in high school?
Well, as you can tell from my description of Bristle-Cone Pine Trees, I was and am a bit of a nerd. In high school, I was brainy and a little awkward and unsure of myself. And yet I was also full of myself the way only a teen-aged guy can be. I was convinced that I knew a lot more than I actually did. “Often in error,” as my mother used to say, “but never in doubt.” I hovered at the fringes of several groups — the deadheads, the geeks, I had a few friends among the really popular kids. But I didn’t quite fit in anywhere, mostly because I didn’t know yet who I was. I had a lot of friends, although I was only truly close to a couple of people. I must have put on a pretty good façade: I was in the yearbook as Most Likely to Succeed, though I’m not sure I really saw myself that way.

Princess Alethea: If you could give one piece of advice (writing or otherwise), what would it be?
Love what you do. This works as general advice and also as writing advice. In the more general sense, I think people need to pursue their passions to the extent that they can. Life passes way too quickly to be wasted entirely on making money at some job we hate or in dealing with people we don’t actually care about. I chose a career that makes me happy, but that doesn’t make me a lot of money, and I’m certain that was the correct choice. I get to spend time with my family, and to be deeply involved in the lives of my daughters. And when I work, I’m happy; I enjoy it. There is no substitute for that.
For writing, “Love what you do” means something a bit different. It’s not just that I love writing, it’s also that I love what I write. I don’t try to write to market trends. I write the stories that excite me, that I want to write. Because the market is a moving target, and the publishing process is too slow to enable writers to anticipate those trends with any real confidence. And because if you write what you think will sell, rather than what you love, your readers will know it. Passion, love, commitment — those things shine through in our story telling. If they’re absent because we don’t love what we’re writing, our stories will suffer for it.

Princess Alethea: The Colin Harvey Memorial Question: What are 3 things you’d like to do before you die?
I’m an avid amateur photographer, and I have always wanted to take a year to drive around the U.S. visiting national parks and natural areas, and create a photographic journal of the trip. I’d like to photograph Yosemite in the winter, Death Valley and the Badlands in the spring, the Northern Rockies in the summer, New England in the fall (and also Alaska — I’ve yet to figure out the logistics of that drive).
I’m also a baseball fan, and I would love to do a tour of ballparks, seeing baseball games in Wrigley Field in Chicago, Busch Stadium in St. Louis, Fenway Park in Boston, etc.
And I would like to go to Africa and see in the wild lions and zebras, elephants and giraffes, hippos and rhinos.
I guess you could say that I like to travel.

D.B. Jackson is also David B. Coe, the award-winning author of more than a dozen fantasy novels. His first book as D.B. Jackson, the Revolutionary War era urban fantasy, Thieftaker, volume I of the Thieftaker Chronicles, came out in 2012 and will soon be available in paperback. The second volume, Thieves’ Quarry, will be released on July 2, just in time for the July 4th holiday. D.B. lives on the Cumberland Plateau with his wife and two teenaged daughters. They’re all smarter and prettier than he is, but they keep him around because he makes a mean vegetarian fajita. When he’s not writing he likes to hike, play guitar, and stalk the perfect image with his camera.