I was tagged by my dear friend Alma Katsu to participate in this infamous NEXT BIG THING meme that’s going around. I was asked to answer the following questions about the book I was working on at the time, and then tag more people at the end.

Want to know a little more about Hero? Here are my answers:

What is the working title of your next book?
Hero

Where did the idea come from for the book?
It’s the sequel to my fairy tale novel, Enchanted. Where Enchanted‘s main fairy tales were Cinderella, The Frog Prince, and Jack and the Beanstalk, Hero is based mostly on Petronella, The Snow Queen, and Hansel and Gretel.

What genre does your book fall under?
Young adult fantasy (though B&N shelves it under Teen Paranormal Romance)

What actors would you choose to play the part of your characters in a movie rendition?
I wish I knew! Peregrine is almost pretty, with dusky skin and long dark hair. Saturday is tall and blonde, with a very athletic figure. If anyone has suggestions, I’m willing to hear them.

What is the one-sentence synopsis of your book?
Um…I can do it in two: Peregrine, whose father died of the Forgetting Sickness, is cursed into the body of a blind witch’s daughter. Saturday is mistaken for her infamous brother Jack, and tasked with rescuing them both from the witch’s clutches.

Will your book be self-published or represented by an agency?
Hero will be published by Harcourt Children’s Books in October 2013.

How long did it take you to write the first draft of the manuscript?
All together, probably about 4 months. There was a big gap in between where I had to change the outline three times before I could finish the zero draft. 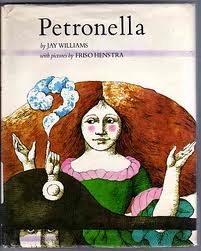 What other books would you compare this story to within your genre?
I tell people that the Woodcutter sisters series is “Once Upon a Time” meets The Princess Bride (the book, not the film). I would shelve it next to Patricia McKillip, Tamora Pierce, Robin McKinley, Jane Yolen, and Diana Wynne Jones.

Who or what inspired you to write this book?
I was most inspired by the story of Petronella, a picture book I owned as a child by Jay Williams, illustrated by Friso Henstra. Petronella is a 1973 feminist retelling of the Grimms’ “Master Maid,” which just so happens to be my editor’s favorite fairy tale. Everything after that just fell into place.

What else about the book might pique the reader’s interest?
Despite its fairy tale trappings, Hero deals with two very important contemporary issues close to my heart: Alzheimer’s disease and gender identity.

Now I’m not a fan of the whole chain letter business, so I’m not going to perpetuate this by tagging more authors who will be forced to participate. (If you’d like to, please feel free, and say I sent you.) Instead, I’ll direct you to some of the Waterworld Mermaids who have already participated:
Loni Lynne
Denny S. Bryce
Carlene Flores
I encourage you to follow the links to their websites and hear what they’re working on.