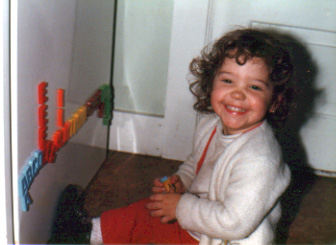 Two more days until Halloween! Which means that — barring a Caldecott Award or something equally as awesome — only two more days for me to bombard the world with all the awesomeness that’s been showered upon AlphaOops: H is for Halloween

It’s no lie — I really have enjoyed visiting all these review sites that pop up and seeing what they’re all about. I’ve enjoyed reading the reviews too — which, in the main, seem to be positive. The only thing anyone can find that’s “bad” to say about the book is that it might be confusing, difficult, even inappropriate, for young children because the alphabet is not in order. It’s been considered as possibly not a good read-aloud. One review (I think this was on Amazon

) even mentioned that the costumes were not appropriate because children today do not dress up as monsters.

These reviews make me chuckle.

If you read my Big Idea over at Scalzi’s blog back in July when the book officially launched, you know my stance on alphabet books (in a nutshell: I think they are boring, self-serving drivel). I knew the alphabet as soon as I learned to speak (see pictured evidence above). Most kids do. They’ll rattle off the alphabet song at the drop of a hat and not even realize it’s the same tune as “Twinkle Twinkle Little Star.” How old were you when you learned the alphabet?

Obviously, I don’t think mixing up the letters a bit harms children, or their ability to learn, in any way. If anything, I hope they find the alphabet a little less boring. I hope they identify with the letters as characters and think of them as just another crazy little family. They are certainly nothing to be scared of.

The truth is that, while it says 4-8 on the sales copy, that’s just a suggestion. You can read it to your two-year-old, and your ten-year-old will get some jokes the younger ones won’t. Even adults have written me fan letters, telling me they wish their corporation would embrace such out-of-the box AlphaOops-ish thinking once in a while.

AlphaOops: H is for Halloween

All of these sites are great sources for fabulous kids books. If you’re a parent, teacher, or librarian, consider adding them to your bookmarks!

**Over at There’s a Book, AlphaOops: H is for Halloween is reviewed by both “Turkeybird” and his mom. Happily, both give it two thumbs up. “By far, a superior alphabet book! Not only perfect for the Halloween season, but anytime of year that you are interested in reading with a child you love. In addition to the delightfully chuckle-worthy story the illustrations are quirky and brilliant, capturing the eyes of all who read it. Blending learning with fun and beauty this is book not to miss. AlphaOops: H is for Halloween is an alphabet book every child should have on their bookshelves, helping to create a love of reading from the very beginning.” (Read the full review here.)

**Presenting Lenore features AlphaOops: H is for Halloween among other 2010 Halloween picture books, calling it both “inventive” and “charming.” (Read the full entry here.)

**Holly E. Newton at Meridian Magazine says, “I loved the first book for its creative aspect of an alphabet book that doesn’t go in the traditional alphabet order, and this book doesn’t disappoint! In fact, it might even be better because it’s so innovative.” (Read the rest of the review here.)

** The Brookline Blogsmith also mentions AlphaOops: H is for Halloween among a list of not-so-ordinary Halloween titles. (Read the full entry here.)