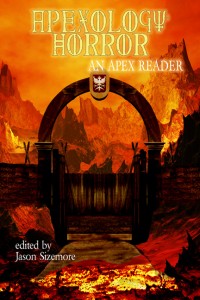 Back in July, a bunch of Apex authors received an email from Jason Sizemore outlining another one of his crazy schemes. He was all excited, jumping up and down (one can imagine), frothing at the mouth (one supposes), and going on and on about how great this e-anthology he’s come up with is going to be. He’s offering nickles for reprints and dimes for originals, but it’s going to be available almost instantly for pennies. The stories have to be horror, just horror, no other constraints. It will be a great avenue for promoting Apex and her authors (I always think of that Alien Head as the Queen) and please send Jason something by the end of the month, thanks.

I chuckled as I closed the email and set it on the back burner. I write fairy tales and dark fantasy and the occasional ghost story, but I’ve never just written horror. Hmmm.

I told the Fairy Godfamily about Jason’s email on the way to the beach for the 4th of July weekend. I heard a similar “Hmmm” from Ariell in the backseat. She and I had previously discussed doing a collaboration. Perhaps this might be the venue? I told her I’d forward her the details when we got home. Perhaps we could think of something.

Two days later, Ariell and Kassidy and I were lying on sandy beach towels in massive amounts of pain, having been stung by stupid jellyfish. Tomo, who skedaddled when we spotted the first jelly, was attempting to distract us with a story of some girl in high school who got crapped upon by a seagull and was called an unfortunate name (think “craphead”, only worse) for the rest of term.

“We could write a story about a boy who gets crapped on by a seagull and then kills everyone who laughs at him,” I thought aloud. “A summer teen slasher short story. Why not?”

“You could kill all the kids from Awesome Porch,” offered Kassidy, who is never at a loss for victims.

“I could write the death scenes,” said Ariell, who knows my weakness when it comes to writing. I just don’t get gory.

“We’ll call it ‘Life’s a Beach,'” I said. I pulled out my little yellow notebook and we all decided who should die and how. Ariell took the notes and emailed me the death scenes when we got home. Then she hounded me for days asking if I had finished the story…because Ariell knows all my weaknesses when it comes to writing.

I finished it. For her. We read it aloud to Kassidy, who approved. We sent it off to Jason and crossed our fingers. He responded, highly amused at what we’d done and said it would be perfect for the anthology.

The last time I spoke to Jason, he didn’t even have a title for the anthology yet. I guess he got one quick — Apexology: Horror — as well as a cover, ’cause it went on sale yesterday. Go on, order it. Support Ariell’s first professional sale! For only $2.99, you download a .zip file with all the epub fonts and pdfs your little heart desires. Scanning the ToC, I’m not sure which stories are originals and which are reprints, thought I recognize a few. All I can tell you is, if you’re up for a silly teen slasher story, the one Ariell and I wrote is definitely worth $2.99 all by itself.

Thanks, guys. And congratulations Ariell!