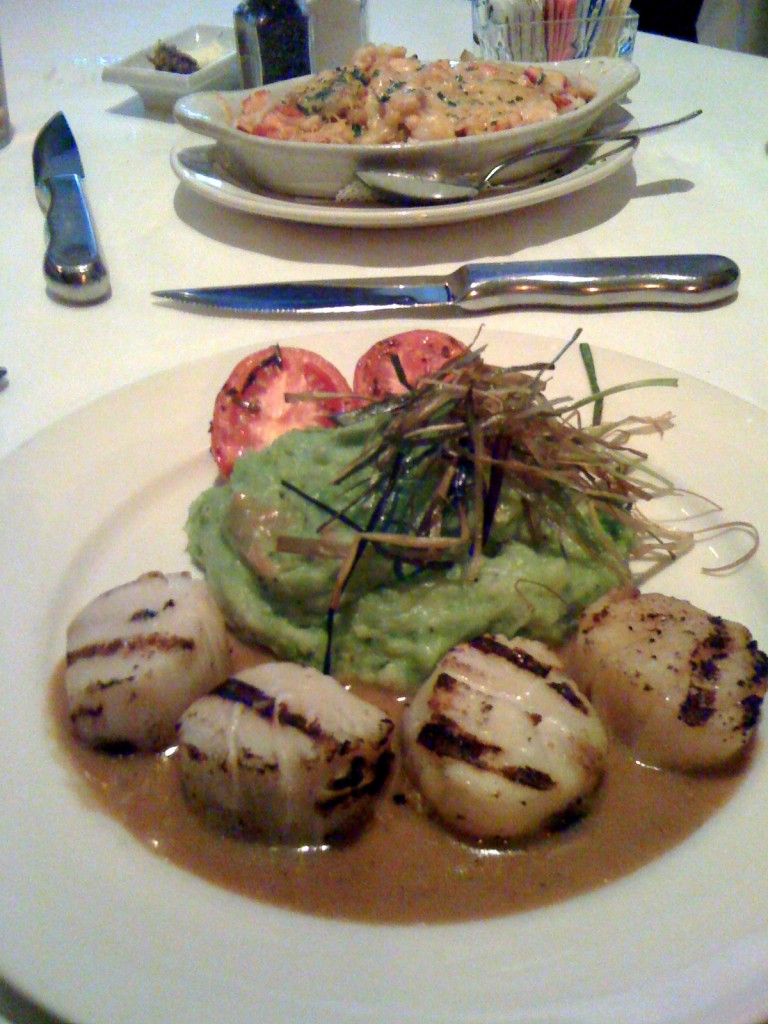 If you’re new to an area, one of the first things you discover is the local dining scene (sometimes not by choice, if you don’t happen to have things like groceries or pots and pans yet). I’m still shiny to this Northern Virginia/DC area, and I’ve been both exploring the area and asking for ideas from folks I know that used to live here (like my parents, and JT Ellison).

Last night, when I Tweeted about my green mashed potatoes, it occurred to me that it might be helpful to someone if I do reviews of some of these restaurants — especially my favorites — not just here, but all around the country. Don’t worry, this is not going to turn into a big foodie blog. My restaurant reviews will probably occur about as often as my book reviews, and will be similarly as searchable. (Check out the Reviews section of the Bibliography tab.)

Last night we went to M&S Grill in the Reston Town Center. Yes, I’m one of those silly people who’s a fan of walking-street-malls that remind you of little European towns. M&S Grill is not to be confused with McCormick & Schmidt’s Seafood — while they are owned by the same company, they are two separate restaurants. At the Town Center, they are across the street from each other.

There is a band every Friday night at the Grill, but they don’t start until 10pm — nice for an uninterrupted prime time casual dining experience, but a little past my bedtime.

I passed on the cocktails, but I did note that Alison must be pretty special if her Sangria recipe got her name on the menu. I also pulled the waiter aside and asked how one muddles a grape, because there was a drink advertising “muddled grapes” as a base. We decided it was just a sexy way of saying “smooshed the heck out of them.” After we placed our order we were brought warm rolls with butter and an olive tapenade that was quite lovely.

My big problem with some of these restaurants is that I just want to order seven things off the appetizer menu and call it good. This time I limited myself to one: the crab beignets, which sounded too yummy to pass up. They were essentially crab hush puppies with a lovely spicy remoulade sauce — good, but not divine. The apple-jicama slaw that garnished the plate was a bit too vinegary for my taste.

For my entree you can see above — I ordered scallops with a lobster saffron sauce and chive mashed potatoes. The scallops were large and perfect, and in the sauce you could just imagine you were eating the most tender lobster ever. The potatoes, which I exclaimed excitedly over when I saw my plate, were mashed with pre-blended parsley-and-chives, to give them that lovely St. Paddy’s Day shade. I was ten kinds of Seussian tickled, and they were rather delicious.

The side dish we ordered, also above, was a lobster au gratin. I was less than thrilled with it, and not just because it couldn’t touch the Tap Room’s lobster mashed potatoes, but because there was too much…lemon, I think. I couldn’t put my finger on it for the longest time…but I’m pretty sure that’s why every time I took a bite I felt like I was eating dish soap. Which was a shame, ’cause I really wanted to enjoy it.

Probably blasphemous that I went to a grill and didn’t order steak, but my companion did, and I had a bite. I thought it a little tough, but tasty — which is apparently what you get when steaks are aged. (I learn something new every day.)

We were too full to splurge and have dessert, though we were *this* close to ordering the bananas foster bread pudding. It was, of course, the oddest selection available…but I’d indulged in far too many green potatoes to enjoy it at all. That, and it didn’t say it came to the table en flambe. I would have had to order it if it was on fire. Kind of a must.

Service: Excellent.
The waiter was knowledgeable, amiable, and had a good sense of humor.

Food: 3.5 out of 5
Because green potatoes are awesome.