Last night at the Chronicles of Narnia play, Lucy mentioned at least three times that it was “always winter but never Christmas.” And while I get the point probably needed to be hammered in to the audience consisting mostly of young children and disaffected parents of young children, it also made Lucy seem a bit shallow and materialistic, which is really Edmund’s job. But hey, kids will be kids, and the play was fun.

It was amusing to actually see what the witch was screaming about the whole time instead of hearing it from where I was hunched over my laptop in the lobby. The set was very well-constructed, and I was impressed how well they dealt with scene changes and full-cast fight scenes — especially when the ratio of children-to-adults onstage far outnumbers that in the audience. I was very impressed by the boy who played Edmund, as well as Mr. Beaver.

And then, of course, there were THE STARS OF THE SHOW: 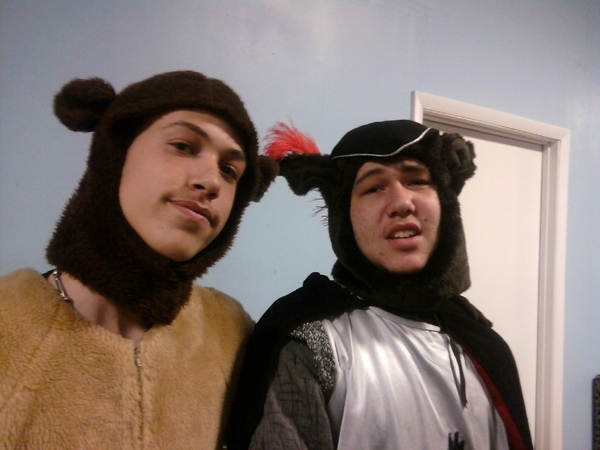 Morgan (left) was Bertram Bear…a whiny teenager with zero motivation to be snipped from his mother’s apron strings. His promise to never leave her–directly followed by the question”What’s for dinner?” had us rolling. Bertram did perish in the full-cast finale fight scene, but was mercifully brought back to life with Lucy’s healing potion. That’s right, children: at the end of the play Bertram Bear is a ZOMBIE. I know what’s for dinner tonight…

Justin’s crime in Narnia–apart from being the feared Fenris Ulf, head of the witch-queen’s guard, and making all of us lose the game after reading his bio–was a little thing we Thespians like to call STEALING THE SHOW. Sure, the witch screamed and ranted and cackled with a passion that made everyone in the immediate vicinity lose their voices, but it was Fenris’s low growl that made the children gasp and cringe. I would not be surprised if Justin’s Ulf made an appearance in several young nightmares over the past couple of weeks–Peter might have killed Ulf according to the script, but all of us watching knew that had it been a real fight, Ulf would have had Peter’s head…and fed it to Bertram for breakfast.

(Hear me now: The first one to suggest The Lion, The Witch, The Wardrobe, and The Zombie gets banned from the website.)

The show was fun, as all shows should be. It was entertaining and–for community theatre–without flaw. The only grievance I have is with the audience. Dickie and Qwee and Manda & Kram and I had already planned to be the loudest hooters & hollerers in the audience when Justin took his bow. But, as far as I could tell from my seat near the back of the audience, I was the only one who stood.

I wanted to scream WHAT IS WRONG WITH YOU PEOPLE? It’s the last, sold-out show of the two-weekend run, a cast of mostly children of whom I’d bet a few hundred dollars you know at least three, they did a damn fine job, and you can’t GET YOUR BUTT OUT OF YOUR SEAT to cheer their efforts? Not only are you disappointing the cast, you are setting a TERRIBLE example for the children you’re sitting next to you. I was always taught to applaud the efforts of anyone who had the bravery to stand up in fromt of a bunch of people and perform, no matter how badly they screwed it up (which they DIDN’T). YOU weren’t on that stage. And if you ever had been, you’d know how tough it was, and how much that applause at the end of the show means.

I didn’t care if the stupid people behind me were thinking, “I wish that stupid chubby woman would sit down so I can see.” The play was OVER. And no way was I sitting down or cheering any less.

Good show, Justin & Morgan. I look forward to the next play!