I’ve had more than a few requests for this since I extolled its virtuesas my birthday cake….so Tracy has given me permission to share her Monkey Bread recipe with the world.
Ask and you shall receive! 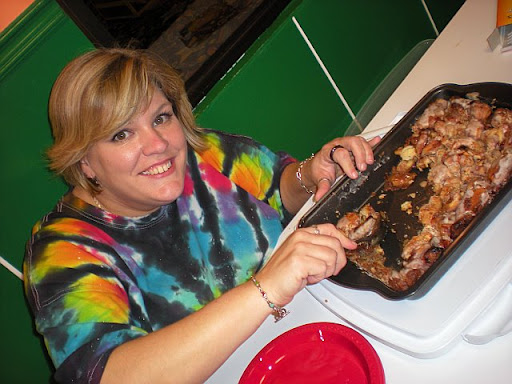 1 bundt pan (If you don’t have a bundt pan you can use a 9×13 cake pan. If I do this size I usually do 4 cans of cinnamon rolls.)
3 large cans of Cinnabon/Pillsbury Cinnamon rolls
1 cup white sugar
1/2 cup brown sugar
cinnamon
2 sticks butter (not margarine, you crazy people)

Preheat oven 350, spray pan with baking spray
Cut up your cinnamon rolls into smaller pieces
In one cup of sugar add some cinnamon; do this in a bowl big enough to waller your cinnamon roll pieces around in.
Drop in a few pieces of cinnamon rolls at a time and waller ’em around real good until they are coated, start dropping them in the pan. When all pieces are waller’d you should have some white sugar left. To that add the 1/2 cup brown sugar. Cut up butter and nuke for about 30 seconds. Stir and nuke until butter is all melted.
Stir really well then pour over the monkey nuggets. Bake for about 30 minutes.
When the bread has cooled down enough to turn over, turn out the bread then pour the cream cheese stuff that came with the cinnamon rolls all over the top.