Southern gentleman and fellow convention-goer J.F. “Jeremy” Lewis has a thing or two to say about vampires…but he wouldn’t want to be one. In a recent chat with Genre Chick Alethea Kontis, he opens up about writers groups, SF and comic conventions, and the details of his recent excommunication from church as a result of publishing his paranormal novel Staked (9781416547808), and the brand-spanking-new sequel, Revamped (9781439102282).

Alethea Kontis: What sparked your interest in Vampires and the paranormal?

J.F. Lewis: My earliest memory of the paranormal was a showing of the Jean Cocteau version of Beauty and the Beast on public television in Mobile. The makeup got me. Jean Marais’ performance as the Beast struck such a nerve that I pretended he (the Beast) was my imaginary friend. Unfortunately, I got it crossed up with a Looney Tunes cartoon and called him George. (“I will hug him and squeeze him and I will name him George.”) /sigh

Yeah… I was a weird kid.

I didn’t catch the vampire bug until Lost Boys came out. Before then I was more into Godzilla, Ray Harryhausen effects movies, and Japanese Super Robots. I read a lot of epic fantasy, but I wasn’t a big Dracula fan until after Lost Boys. Then I began reading tons of Steven King, H.P. Lovecraft, that sort of thing. I’m sure comic books had something to do with it too. I’m a huge comic fan…so much so that we had to have the space under the comics-closet professionally reinforced so that the floors wouldn’t tilt in that direction.

AK: What paranormal authors do you read?

JFL: I’m a big C. E. Murphy fan and I just finished her Negotiator series… which reminds me of the Beauty and Beast television series (with Linda Hamilton and Ron Perlman) except with gargoyles and a female lead that can actually kick a little butt and *do* things. I tend to shy away from reading other vampire stuff because I’m afraid of unintentional influences cropping up in my writing. But since I’m a member of the League of Reluctant Adults, I’ve been enjoying their books. Mario Acevedo’s Felix Gomez series is cool, and I love Mark Henry’s zombie stuff. Jackie Kessler is great fun, too. The way Stacia Kane and Mark Henry each went with what I’d call a darn near perfect mix of parapsychology and magic is very interesting. The way Simon’s psychometry is tied to hypoglycemic fits as the “price” of his abilities works very well. Probably the paranormal author that scares me the most is Nancy A. Collins. Her Sonja Blue stuff can be downright disturbing. And of course, I read anything Neil Gaiman writes, but I think that’s pretty much a given.

AK: In the acknowledgements for Staked, you mentioned your writers group and their input on early drafts of your manuscript. Is that group still around? How is it set up, and how do they give you input?

JFL: Yes, the WTF is still around. We meet most Fridays, sometimes to do the writerly thing and other times just to game and hang out. Technically we’re all supposed to submit between 2,000 to 10,000 words a month and rotate, but only two of us are actually working on novels right now. (Hi, Rob! Where’s that novel of yours, old buddy old pal?) We also have two grammar Nazis in the group who submit stuff from time to time, but mostly come to have pity on the grammatically-challenged and bleed on our fiction. So it’s kind of turned into a nice mix of writing group/beta readers/good friends. I can always count on them to come over on short notice, bring food, and proof-read into the wee hours of the morning when I have a deadline. They are supportive to the point of bringing cookies to my late-night panels at conventions. They’ll all be around during ImagiCon this March. Several of them are planning to come to ConCarolinas, as well.

AK: How exactly *did* you get excommunicated from your church?

JFL: Basically, it was a failure to communicate. I’d been a member of that denomination for over fifteen years and a member of that specific congregation for three years about a decade ago (before we moved) and four years recently (after we moved again). The reason I say it’s a case of miscommunication is that I was continually open and honest about my goals as an author and the kind of fiction that I write. Even in our bio in the church directory, it says that I’m an aspiring novelist. It says that I’m a gamer, too. As I was writing Staked (9781416547808) , I even pulled one of the elders aside, long before I’d sold the book, and talked to him about the content, the language, etc. Heck, I even offered to let him read it. He said (with a smile) that he didn’t think that would be necessary. I didn’t hear anything else about it until after the book was out, and I went to OmegaCon (a first year convention in Birmingham).

As a result, I wound up being interviewed by the local news… one day later (on Sunday) I had a voice mail from the Elders informing me that they wanted to meet with me about the book they’d “discovered” that I’d written and “had published and was promoting.” Discovered? I thought, but I told you guys about that… What do you mean discovered? My heart sank and it was pretty much downhill from there. They accused me of being guilty of all kinds of things, ranging from adultery (because I wrote sex scenes) to trying to teach children to curse (because they apparently think all fiction novels are aimed at children, and it contains profanity). For the record, it’s not aimed at kids. I’d think the quote on the cover and the stripper pole would give that away, but that’s neither here nor there. My true crime was that I suddenly failed to match their mental image of what a member of that congregation should be.

Anyway, I went into the meeting expecting to have a rational discussion, but it became apparent very quickly that I was there to be corrected, not heard. One Elder went so far as to tell me “in the Old Testament we would have just stoned you” (which he later denied saying), and then another referred to me a wolf in sheep’s clothing. My brain kind of derailed. They told me that in order to avoid being withdrawn from (what most folks would call excommunicated), I needed to refuse to promote the book, stop writing that sort of thing, refuse to turn in the second book, publicly denounce the books, give back the money, and refuse any future profits. Obviously I wasn’t going to do any of that, so they went after my wife and tried to use her against me. They basically accused her of aiding and abetting and threatened to excommunicate her, too. There were lots of meetings, and once it was all said and done, they gave me a deadline to accede to their demands. I let it pass… and they gave me the boot. After lots of tears, my wife met with the elders and, essentially, said anything and everything she had to in order to keep from being kicked out. As a result, her grandma is still alive, she and our kids still effectively attend that congregation, and she cries a lot. Some have asked if the whole thing is a publicity stunt, and all I can say to that is…. I wish.

The weird thing is, I don’t think most folks understand exactly what “being withdrawn from” means. It’s less about not being allowed into the church building, and more about not wanting other members’ kids to play with our kids. (Which is really tough, because their kids and our kids were friends.) I can still attend classes and services, but I’m not allowed to serve on the Lord’s Table, do a scripture reading, or give the invitation. We get the occasional message from members saying that they miss us and pretending not to understand why I’m not comfortable being there anymore. It’s very passive-aggressive. They say that I’m welcome, but if I actually go, I get weird what-are-you-doing-here looks, particularly from two of the Elders. Sometimes we talk about trying to find another church in our area, but it just hasn’t happened yet.

AK: At conventions, there is always a smiling group of people clustered around you wearing “Welcome to the Void” t-shirts. Are you actually related to these people?

JFL: Some of them. J Most of them are either members of the WTF or members of my family. Of course, now that I’ve sold a few t-shirts, some them are actually fans, which is always a shock to me. We have a few of the 2008 shirts left and are working on the 2009 version (the date and the band names on the back of the shirts change each year), which will be out soon.

AK: Did you go to strip clubs to do research for your books?

JFL: Nah, I’ve never been to one, which is why I was kind of astonished to get fan mail from a few dancers telling me how close I’d gotten on some aspects. Some said I was way off on how dancers get paid, but I maintain that most dancers don’t give their boss blood, so it makes sense that Eric pays extremely well and provides benefits that non-vampiric club owners wouldn’t.

AK: Tell us about the stuffed rat. [edit: Alethea humbly apologizes for referring to Stanton as a rat.]

JFL: Stanton is a WebKinz White Mouse and I carry him to conventions so that I won’t be lonely… or that’s what my youngest son claims. The LOOONG story about how I got into WebKinz in the first place can be found on my blog here. But Stanton’s story is a little different. When I was heading out the door to go to one of my first “by myself” cons (San Diego Comicon, I think?) my youngest son asked me who was going to keep me company, and he insisted that I take Stanton along to do just that. Being a wise little four year old, he also insisted on photographic evidence. So, now, when I’m at a con, I often have Stanton with me in my backpack (he has to be in the mesh side pocket so that he can see of course) and I take pictures of him and send them back so that I don’t get into trouble with my kids.

AK: If you could be any superhero, or have any superpower, who/what would it be?

JFL: So… the cheesy answer would be The Beyonder, because he’s basically omnipotent. If I picked my favorite superhero, though, I’d be Wolverine. There’s Superman, but if you’re Superman then someone out there would have Kryptonite, so I think I’ll go with the Power Cosmic. Sure I might wind up painted metallic silver and riding a cosmic surf board, but it also comes with functional immortality and the ability to travel through space at obnoxiously improbable speeds.

AK: Additionally, if you were any monster in Void City, what would you be?

JFL: Vampires are cool and true immortals are very nifty, but if I got to pick, I would totally be a mouser. I can’t really say why yet, because I haven’t given up the goods on mousers in the books yet, but… mouser. Definitely. 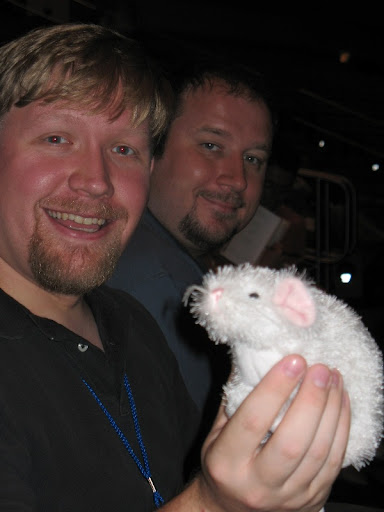