I knew when I challenged Mary Robinette Kowal to an Iron Chef battle that it would be a losing proposition. Not only has Mary been in more of these battles than she has fingers, but she is a much better chef than I, has much more practical experience with experimental cooking, and–hello!–it WAS HER BIRTHDAY PARTY. Even still, I planned on putting up a fight.

Early that morning, Steven Gould presented us with our theme ingredient: pear.

With Mary’s expertise in mind, my team (Laurel Amberdine, David Levine, & Beth Wodzinski) and I decided to go all-out with our recipes. We just searched out stuff that sounded crazy, too good to be true, and a little on the adventurous side. I had a few phone calls with my mother (one of which inspired the yummilicious dessert), and Beth used a lifeline to call her father, who walked us through a daring main course entree. I left that in Beth’s capable hands, and Laurel, David, and I worked on the soup, salad, and dessert.

The first thing we did was to take stock of what liquors were on hand. This was monumental in guiding our cooking decisions. And I was proud that my nose has at least matured enough to be able to sense which liquors might go best with what dish (though I still firmly believe all liquor is good when used in cooking). Then we Twittered our friends and asked the Facebook collective, many of whom provided intriguing ideas that set our gears a-spinning. 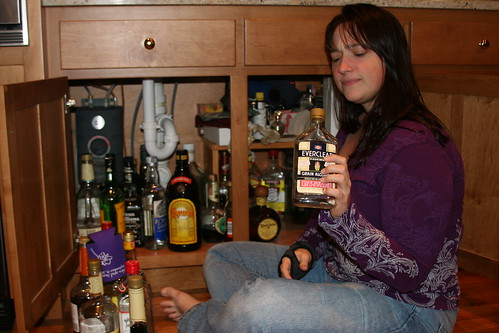 Beth was a whiz at writing everything up, keeping it organized, and getting the grocery list together. David came up with some great ideas for garnishes. Laurel thought adding a pear tea to the meal would be a nice touch. I have to say — we all worked incredibly well together. I was very lucky in my "names pulled out of a glass bowl on Mom’s table" picks.

The shopping trip was fun — Steve brought his camera and took so many pictures he almost got thrown out of the grocery store for being some sort of industrial spy. (Look for more pics on his flickr photostream.) Beth and I were amazed that our shopping cart seemed so empty. We had taken stock of the house, and only needed to buy $100 worth of food to feed 13 people.

I really, REALLY need to try this more often. The best part, of course, was each of us running around the kitchen with spoons going, "Oh my god, taste this!" We were increasingly more and more shocked at how amazing everything was turning out. (Then again, mud pies got nothin’ on triple-cream brie.)

Our first course was Pear & Brie soup. We chose it because, well, brie is seriously yummy, and because the soup only had three ingredients: pears, chicken stock, and double-cream brie (we used triple-cream. Sue us).

Our second course was a poached pear spinach salad, with macadamia nuts and goat cheese. We couldn’t find roasted macadamia nuts so we tried to do it ourselves…probably not the best idea in a busy kitchen, but we didn’t charbroil them all, happily — we put the burnt ones in a dish and snacked on them before and after the meal. The pears we poached in campari, white wine, sugar, and a little vanilla. They took on a gorgeous red color, which looked fantastic in the salad. (Many of our dishes were unfortunately beige, but we tried our best to throw something in that wasn’t.) The poaching reduction we used in the vinaigrette – nothing was wasted in our kitchen!

The main course was duck (oh yes, despite none of us having ever cooked duck before we went with the wild card) over couscous, with a balsamic-pear gastrique we all dubbed "awesome sauce" because it really was that good. Beth slaved over it, even burning her finger to a crisp when she chose to test the line between "carmelized" and "burnt to holy hell."

Our dessert should have been our ace in the hole. It was simply canned pears, blended with cognac and sugar, then poured in a rectangular pyrex dish and frozen – instant DELICIOUS sorbet. What killed us was that we decided to present this sorbet in an oven-roasted pear.  I would have liked the roasted pears to have been a bit softer – perhaps they would have been had we hollowed them out more before cooking – but we only had two hours to cook (these were thrown in the oven half an hour before time), and our group went second, which meant we had to manage heat for all our dishes. I *could* have left the oven on while we were eating at the other house…but I’m very uncomfortable doing that, especially with a gas oven at someone else’s home.

When we served it, we put a candle in Steve’s and sang a chorus of "Happy Birthday" — technically Mary’s birthday was Sunday, and it turned out Steve’s was Saturday, the night of the competition. We downplayed it, since this was (still is!) Mary’s big event, but our team decided he needed a few more moments of appreciation. (And no, I’m not telling you how old he is.)

Mary’s parents were two of our guest judges, as well as two of her wonderful cousins. I’ve met them before at several family affairs and enjoy their company, so I was glad they came. Also, since they knew me, it wasn’t as if they were voting against a stranger, so it evened the odds. They turned out to be VERY informed and fair judges. I was actually a little nervous when they finished their deliberations and returned to the dining room just outside Kitchen Stadium Number One.

For all that I knew we were going to lose, our team certainly gave Mary a run for her money. We won the soup and salad courses. Mary’s team won the entree course, and best in show for that dish — it was a beautiful pork tenderloin with a pear cream sauce and a pear rissoto that completely rocked. Mary also won dessert with her red wine-soaked asian pears, topped with chocolate and pistachio ice cream. Since we tied (though Mary won for the stronger courses), Mary broke the tie for having the "Best in Show" dish.

I was incredibly proud for our team, not just for having come so close, but also for having chosen the braver dishes (the duckwas lovely!) and throwing caution to the wind and experimenting. The ease with which we found recipes (thank you, Google), and the overall success of the dishes made me want to be a little more adventurous in my cooking. I really am a fair cook, as it turns out, and it’s certainly not so much an economic issue…or, it doesn’t have to be.

I dare you to go crazy — pick an item in your fridge or on sale at the grocery store, and find a crazy recipe on the internet or in a fancy cookbook you’ve never tried. I think you’ll surprise yourself. We certainly did!