And what have you done today?

It stinks when there is an event that you would love to go to more than anything in the world, but you know you just can’t. I mean, you *can*, but it would require a sick day or two, at least $600, and missing an episode of BSG. Because I knew–I just KNEW–that the Borderlands Books event "John and Mary Show You Their Shorts" was going to be amazing like cake donuts and cocoa on a cold morning. Not just because Mary Robinette Kowal and John Scalzi are fabulously, show-stoppingly talented people, but because they are two of my very good friends whom I love to pieces. And while I’ve had the good fortune to somehow cross paths with Mary every few months for the last year or so, my daily pilgrimage to Whatever isn’t quite the same as kicking the ball around with John.

All princesses in Ivory Towers need their friends.

Unlike the miracle that brought me to my first World Fantasy convention, the machines of the universe didn’t deem me worthy of a jaunt to San Francisco the weekend after my birthday. But, as the rumors of video and audio offerings floated around Teh IntarWebs, and reports of the calamity came trickling in, I realized….apparently I was there after all.

Without further ado, John Scalzi presents an audio of "Science Fiction Comedy Improv", featuring the PetMaster 2000. Prepare for much giggling. (My coworkers just stopped by to check my sanity.) Be sure to pay close attention to the unfortunate event that befalls Mary’s neighbor. And ask yourself: One bite, or two? 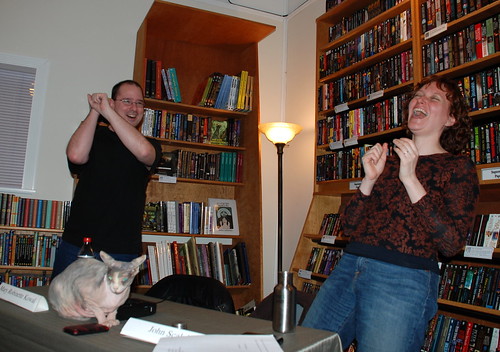 Two of my favorite people in the whole wide world. And a hairless cat.