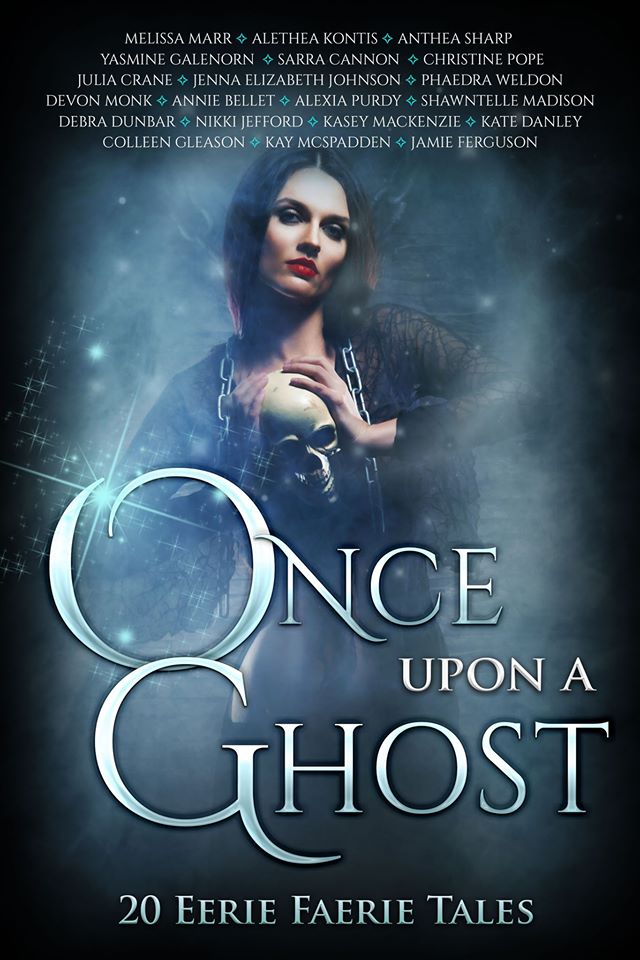 It’s always fun to have a new release out in the world — Happy Book Birthday to Once Upon a Ghost! This anthology contains my story “The Ghost of Beilstein Castle.”

Twenty dark and ghostly faerie tale retellings from the bestselling authors in the award-winning Once Upon Anthologies series! Push open the creaky cellar door and prepare for chilling re-imaginings of your favorite tales. But beware! Blood and revenge, creepy haunted houses, and evil magic lurk within the pages. Are you brave enough to venture in?

A HUNTER’S MEMORY OF WINTER – Annie Bellet
Ka is a hunter for hire. She’ll kill anything, for a price. But her newest job will require more than just a bullet… for her prey is already dead…

HAUNTED – Kay McSpadden
The old Bayer house might be haunted, but that doesn’t keep the little golden-haired girl from going inside–again, and again, and again.

FAERIE SONG – Anthea Sharp
The Pipers have rid the city of vermin, but their music hides a dark magic that only one courageous girl can break.

FORGIVEN: A Djinn Wars Story – Christine Pope
Celia Graham might have survived a deadly plague, but that didn’t prevent her from becoming a ghost doomed to haunt her opulent home for all eternity.

WHAT MAGIC LIES BENEATH – Shawntelle Madison
Long ago, a bog witch killed Everbelle’s brother. Now the memories of him haunt her–as well as his ghost…

THE GHOST OF BEILSTEIN CASTLE – Alethea Kontis
From a riverside castle in post-war Germany, a tormented young American widow recounts her ghostly adventures with a dead bride, a fiery-eyed hellfrog, and a lost treasure.

SNOW WHITE BETWEEN TIME – Julia Crane
After eating the cursed apple, Snow White awakens in a strange land. The sun and moon have disappeared, and her only friend is a red-eyed wolf.

WHAT TALES SPECTERS TELL – Kasey Mackenzie
Amelie Baudelaire faces off against the cruel Necromancer who saved her life two years earlier. Now he demands her most precious prize of all–her firstborn child.

THE DEVIL’S DUE – Melissa Marr
Never cross a devoted sister, especially one fond of sword fights and sea-faring.

THE BREMEN SHIFTER BAND – Debra Dunbar
Geriatric shapeshifters in an assisted living facility discover with the help of Elvis’ ghost that they’re never too old to Rock and Roll.

THE BANSHEE OF LIATH WOOD – Jenna Elizabeth Johnson
Kye of Haebach Heath must enter one of the most haunted places in all of Eile in order to free a maiden from her dark curse.

THE GHOST QUEEN – Nikki Jefford
When the King of Gloria offers gold to anyone who can present him with the fairest bride in all the kingdoms, two necromancers resurrect the loveliest woman to have ever lived.

IMMORTAL PORTRAIT – Colleen Gleason
Frost Elite escort service’s Shep arrives to meet a new client in the hills of Hollywood, and poses for a deadly photograph…

TO BE REMEMBERED – Jamie Ferguson
After her brutal murder centuries ago, Ilona haunts the forest with her newfound sister nyavka, luring men into the woods–and to their deaths.

THE SOUL CAGES – Phaedra Weldon
When her treasure is stolen, the vengeful Sea Goddess destroys the country’s ships and takes the souls of their crews. Only one woman can save them.

ELLA AND THE HAUNTED HOUSE – Sarra Cannon
Descended from a long line of ghost hunters, Ella is forced to spend her birthday in a haunted house with her horrible stepmother and stepsisters.

THE THORN KING – Alexia Purdy
Trapped in a scorched rose garden, Riley finds himself in the domain of a malevolent creature cursed by a dark magic ready to claim him as well.

LITTLE FLAME – Devon Monk
Avens is not powerful, she is not a witch. But she is the last hope to save the world.