I have been asked to talk a little bit more about the now-infamous 2010 Christmas Pageant song “The Twelve Rules of Christmas” (Click here to watch on YouTube). 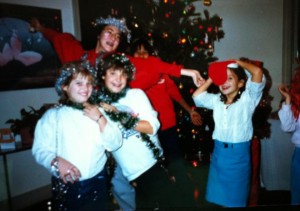 Rule#1: No Decorating the Tree
I believe this rule originated the first year we moved into the giant house in North Springs…so I was about ten and Soteria was eight. We had a staircase with a long banister that curved at the end, and a huge ballroom. The tree was on the end of the ballroom closest to the windows facing the road. I spent hours fixing the garland that wrapped down the banister so that every green branch looked like a living snake off Medusa’s head. (Apparently, pine branches are straight and stick out forward.) Soteria and I were also in charge of the tinsel, which represents snow. Snow falls from the sky. We assumed the best way to put on the tinsel would be to throw clumps up in the air and let them fall where they willed. (While this *is* how snow falls, it is not correct for the application of tinsel.) Mom was so frustrated that she banned us from decorating the tree ever again; the least-stressful solution for all parties involved.

Rule #2: No Boys in Your Room
This is a good rule for any parent who has girls.Especially if they’re boy-crazy girls. However, it is sort of an annoying rule in a two-story house when a.) all your daughters best friends are boys and/or q.) she has no problem kissing the girls anyway.

Rule #3: No Food in the Den
Also a good rule if you’re a stickler about cleanliness. The only TV was in the den (this is back when families only had one TV and were lucky if they had only one very-slow computer). The way I got around this rule was to sit in the hallway outside the door and eat my Doritos while watching Star Trek TNG after school.

Rule #4: Can’t Ride with Teens
Teen drivers are, by definition, not very experienced drivers. They are also easily distracted when other teens are in the car. But when so-and-so’s brother is the only way you have to get from point A to point B, you’re SOL with this rule.

Rule #5: “If I find it, can I smack you?”
The person in the house with all the power is the person who cleans it. It follows that the person who cleans it is also the person who knows where everything is. Why should we bother looking when he/she can tells us exactly where it is? But when we’ve looked for ten minutes already, even after hearing “Are you looking with my eyes?”, we would get this saying…for which my mother is now famous. Apologies for the ear worm.

Rule #6: No Table Singing
No one has any idea where this rule came from. When doing research for The Dark-Hunter Companion, I discovered that singing at the table was bad luck in certain circles. I asked Mom if that was the origin. “No,” she said. “I probably just made it a rule so you girls would be quiet.” And there you have it.

Rule #7: No Last-Minute School Help
This is possibly the best rule my parents ever gave us, and I suggest it to everyone else I know. The full rule is: Mom and Dad will help you with your school projects to the best of their abilities, but not within 24-hours of the project being due. If you tell them in advance, you will have all the materials and brainpower and handiwork at your disposal. If not, you’re on your own. I was on my own a LOT…but I knew it was my own fault, because I knew the rule.

Rule #8: Write Down What You Owe Me
God, we hated this rule. There was a list behind the kitchen door of all the money we ever borrowed from our parents, that we were expected to pay back (with chores and cash). We never got money for gas or money to go to the movies. If we made a long-distance phone call, it was written down. Car insurance? You betcha that was on the list. It certainly taught us to be financially responsible…and to abhor money above all else.

Rule #9: Don’t Slam Your Door Shut
We were emotional, melodramatic teenagers who grew into emotional, melodramatic women. Slamming the door shut was a great way of making your point and ending the conversation. It was also a great way for the door to start coming away from the wall. We also weren’t allowed to lock our doors, or tie the bathroom door to the bedroom door so no one could enter from the bathroom…

Rule #10: Complain and You Can’t Have More
Also one of the best rules ever and now I see why…I HATE people who groan or say “ew!” at the dinner table, especially after a long day after I’ve made dinner and am ready to sit down and relax. We were forced to try one bite of everything on the table anyway — if you complained about the dish, and then tasted it and LIKED it, you weren’t allowed to have any more. Since both my parents were pretty darn good cooks, this was a legitimate threat. I believe both Soteria and I have very open-minded palates as a result of this rule.

Rule #11: If You Ask Me If Your Friend Can Spend the Night and Your Friend is Standing Right There, The Answer is Automatically No
Pretty self-explanatory. There was just no way to shorten this one.

Rule #12: Dishes, Dishes, Dishes!
Doing the dishes was our job. One sister did the dishes, one emptied the dishwasher. We traded off. It was the worst experience and scarred us both for life. My parents cooked stuff like Egg Foo Young and Bisteeya and Moussaka and they used every dish in the house, and we couldn’t go to bed until the entire kitchen was spotless. Whatever you couldn’t fit in the dishwasher (there were more rules about what to put where in the dishwasher and how clean it had to be before it went into the dishwasher), you had to do by hand. After dinner parties with visiting dignitaries, Soteria and I were sometimes up well past midnight doing the dishes. After I moved out of the house, I didn’t have a dishwasher for over a decade. I didn’t mind it one bit.

There were other rules that didn’t make it into the song…the last to make the cutoff was “No Screaming Help While Swimming.” (We lived on a lake…if you were screaming “Help!”, you better be drowning.) One day, Soteria and I might sit down and try to remember all the rules…perhaps we could make a book out of them.

Did you guys have any crazy rules while growing up?

3 thoughts on “The Twelve Rules, Annotated”