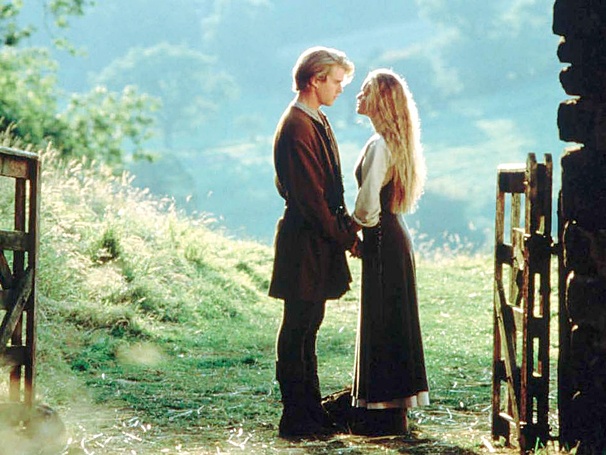 I didn’t see The Princess Bride when it came out in theatres.

A rare thing, I know, especially for a kid like me who literally grew up in a theatre. It was my first job at sixteen. I have family in Vermont who own several theatres—every summer when we went to visit, I spent hours theatre hopping (when I wasn’t tearing tickets or scooping popcorn).

But The Princess Bride released in September of 1987, and summer was over. Seventh grade had already started. I still remember looking through the paper at the film ads and seeing the listings for The Princess Bride. “What a stupid title,” I thought, and so I didn’t bother to see it.

(Remember, I thought princesses—and girls who tried to be them—were stupid until I was almost thirty. By that time, I was well aware of the responsibility that came with the title, and was ready to step up and accept the tiara. But that’s a different blog post for another day.)

So my first exposure to The Princess Bride was in 1988 or 1989, when it was out on VHS. I fell in love with it. And then my ninth grade English teacher gave us an assignment where we had to read a book that had a movie based on it (the book had to come first). I chose The Princess Bride. I don’t recall if I read it all in one day—it’s a safe bet that I didn’t sleep much, if there was sleep. I do remember, however, that upon reading the last line I closed the book, took a deep breath, opened the cover and immediately started reading from the beginning again.

I believe The Princess Bride is the only book I’ve ever done that with.

I memorized every line of the film, as well as a good chunk of the book. I wrote to the publisher, as requested, to find out what happened during the reunion scene before the Fire Swamp. I ended up getting into an argument with my English teacher, who thought I should have tried harder to track down the unabridged, unexpurgated Morgenstern classic. Every time I went into a used bookstore, I bought extra copies to keep on my shelves and give to friends at random.

I’ve always had a tough time choosing a favorite film, but after a few years of this, my favorite book was pretty obvious. There was just one thing missing. I had never seen The Princess Bride on the big screen.

Cinema World, the theatre down in Melbourne, has a Cult Series where they show classic films late on Friday and Saturday nights (next week’s is Akira). I had been invited months ago by Ashlynn and Sarah, my besties from the B&N down there. I bought my ticket early: a combo that came with a drink and popcorn…a true splurge. I stopped buying concessions when I started paying for tickets. After so many years, movie theatre popcorn really doesn’t hold the same romance for me as it does for you.

But this night, it did. Which was good, because I needed it to. I sat in my comfy seat, eagerly awaiting the moment when the lights went down and I got to live the magic all over again. It was beautiful and perfect and funny and brilliant and over far too soon.

But the magic didn’t fade when the lights went up. There was still a softness around the edges of my mind the whole drive home. Like opening a time capsule, but so much more. I was twelve again, at the beginning of everything. A budding writer, a hardcore bibliophile, a genius outcast collecting misfits on the playground. I could step through time and erase all those annoying mistakes I made, all those horrible relationships I fell for in the search for my own Wesley, only to be disappointed every time and insane enough to pick myself up and fail all over again. There were no regrets for things I hadn’t done. The depression was gone, no one had died, and my heart—though still overly big and emotional—was largely unbroken.

Vizzini said that if anything went wrong on the job, or they had to split up for any reason, they would meet back at the beginning, where he had first hired Inigo and Fezzik. Inigo even made up a rhyme for Fezzik to remember: “Fool, fool, back to the beginning is the rule.” Fezzik, of course, forgot.

I forgot too, it seems.

Life gives us no do-overs, that’s true. And life isn’t fair, as the Goldman Rule taught us. But no one says that we can’t mentally take ourselves back to the beginning and look around a while. Remember why we’re here, and the paths we took. Give ourselves a break from the burdens of guilt and grief we carry, the ones that only get heavier as the years go by.

I may not be a girl on a farm anymore, but I am a princess now (with a Brute Squad, even!). I choose my own adventures. Fair or not, I have no life at all unless I live them.

2 thoughts on “*DeLorean not included”