I went to NY on Monday afternoon. Came back to DC Tuesday night and went straight to the OSC launch of Pathfinder at the Borders in DC. (I haven’t seen Scott in forever, I wasn’t going to miss that!) Wednesday morning I got up, packed, and that afternoon drove to FGB’s parents’ house near the coast. Of course, I packed the wrong cord to upload the pictures, which is why it’s taken me so long to post this. (Well, that and I didn’t want to be horribly rude and spend the whole time on the computer, trying to juggle files.)

New York was wonderful, and a whirlwind. Dearest Leanna collected me off the bus and we went straight to her television studio dressing room so I could change for dinner. (Because The Big Apple has a dressing room every ten feet — my second choice was a phone booth, of course.) From there we caught a cab to the Aspen Social Club for the Codex Writers Dinner, where we met Lawrence & Valerie Schoen, Mary Rodgers, and Jamie Todd Rubin. 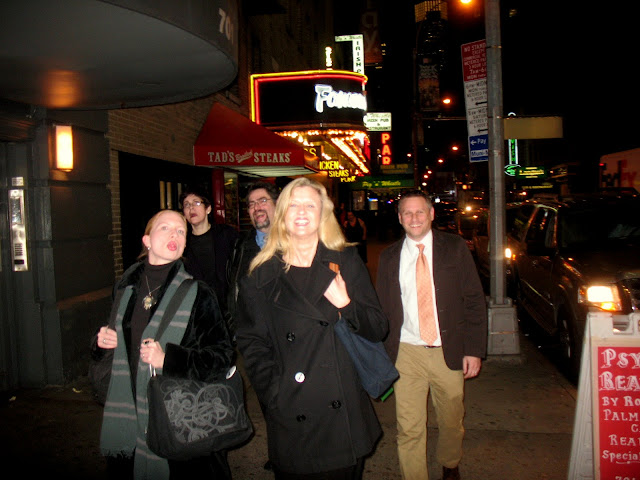 From there we walked the short block to Planet Hollywood for the SFWA “Mill & Swill” soiree. What with the move from TN and everything, I’ve been considerably off the SFF radar, so I admittedly spent more time catching up with old friends than I did meeting new folks. (Which is typically what happens when one puts a bunch of introverts in a room with too much liquor and not enough quiet spaces.) I did a tad bit of schmoozing, however, and ended up spending most of my time with my two new best friends: Kelly and David Forbes. Thank you, Murphy, for introducing me to them AFTER I left PA, where I was about twenty minutes from their house. Grr.

Mary Robinette Kowal was far too busy doing the VP thing with the entire room, so I only managed to speak with her for about five minutes, long enough to pass on my love to her parents and snap this picture of us so I could show all of you her smashing red dress. I covet. 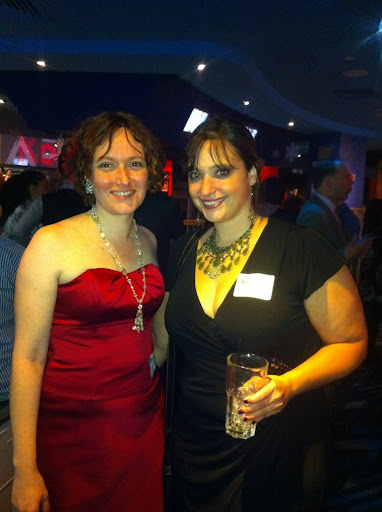 It was both a long night and not long enough, and I was so dizzy when I got back to Leanna’s apartment that I simply fell into bed and passed out…waking up pink windows full of a magnificent sunrise. Leanna and I stopped at the Dorchester offices for coffee on the way to the bus stop so I could say hi to some old, dear, and much-missed friends, and then a fairly-late bus stopped for boarding in the middle of the road and whisked me away back to the Emerald City of DC. I survived both the bus trip and the metro, and–somewhat worse for the wear–got picked up at the station by FGB to be whisked away again to Orson Scott Card’s Pathfinder signing at the Borders in DC.

As tired and miserable as I was I might have skipped it, but I haven’t seen Scott in a ridiculously long time (read: years), and I felt like the bad niece for not catching up with her favorite uncle. Of course, it’s been a while since I’ve been to a signing that lasted three hours, so Scott and I didn’t get to talk much, and we had to wait forever to do so because we didn’t realize that buying the book FIRST is what gave us a spot in line until it was far too late.

The best part, though, was during the Q&A, when a woman in the front row raised her hand and asked about Scott’s role as a teacher. She mentioned that she had been to a signing a few months ago by one of his students, and asked if Scott had similar success with many other students. I immediately shoved AlphaOops: H is for Halloween

in the air (I had brought a copy to give to Scott) — when he noticed, he laughed and asked me to stand up and brag to the audience. It couldn’t have been better had I planned it. And all the waiting was worth it just for this hug. 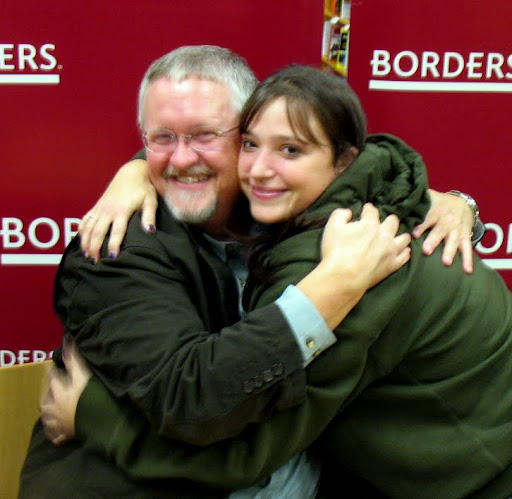 Check out the rest of the pictures from my NY trip and the signing here!

(And no, before you ask, I will not be reviewing Pathfinder for IGMS. We sort of see that as a conflict of interest. Which means I get to read it and enjoy it…and then maybe tell you what I think of it here on the blog. But only if I feel like it.)