When you’re the survivor of a heartbreaking soul-crushing really bad break-up, the first thing you ask is, “How long does it take before I’m over this asshat jerkhole person who was not worthy of me?” You will ask many different people this question, and you will receive many different answers. Ultimately, it depends on a lot of things. It depends on how long you were together, how badly you were hurt, and how much future contact you will have with this person. Ultimately…it depends on you. Like Mr. Stafford says: You Are The Only One Who Can Make You Happy.

But even when the wound’s scabbed over, there are those little things that’ll jump out of the woodwork and rip the bandage off every time — the sweating of the small stuff, as it were. Quoting a certain film. Saying a phrase with a certain inflection. Using a certain endearment. Hearing a certain name.

The biggest bastard person moron who was not worthy of me in my whole entire life was named Steve. Even after I had gotten over the crushed dreams and the stupidity and the massive amounts of debt whatever and gone on to date other people, I still flinched whenever I heard someone say “Steve” outloud.

Now…this is an unfortunate thing, since Steve is the 146th most popular name in the US. I knew quite a few folks named Steve. I even dated two other guys named Steve in the past. (My mother will never again let me date anyone named Steve now — sorry, gentlemen.)

Last year, Murphy apparently decided that I needed to get over my damage with this whole “Steve” thing. In February 2009, I spent a week with one of the most amazing guys I’d ever met…named Steve. It was tough, but I forced myself to say the word outloud and hear it be said without reacting.

Four months and five Steves later, I realized that it was going to be a “Year of Steves” — 365 days of therapy on behalf of the Machines of the Universe where I was gently reminded that one bad egg shouldn’t spoil the whole basket. 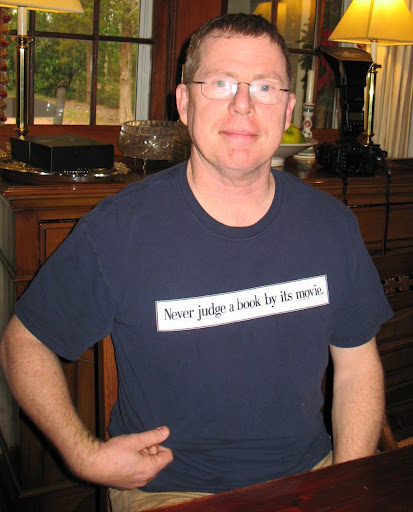 February 2009 – Steven Gould: As mentioned above, Mary Robinette Kowal had a bunch of us crazy writers to her house for a week-long writers retreat, Steampunk photo shoot, Iron Chef competition, and birthday party. The first person I met? Steven Gould, author of Jumper. There was no way on Earth I was going to escape without hearing or calling or yelling or typing his name about a billion times that week…and multiple times in the 360ish days since. Little did I know, this Steve was only the tip of the iceberg.

March 2009 – Steven Saus: A little over a month after Mary’s soiree, I finished my novel. As a reward to myself, I drove up to a little convention called Millennicon. There were many old friends to be met and new friends to be assimilated enjoyed: including a lovely writer named Steven Saus who helped me avoid crazy traffic and find an alternate route out of Cincinnati…and for which I will be eternally grateful. 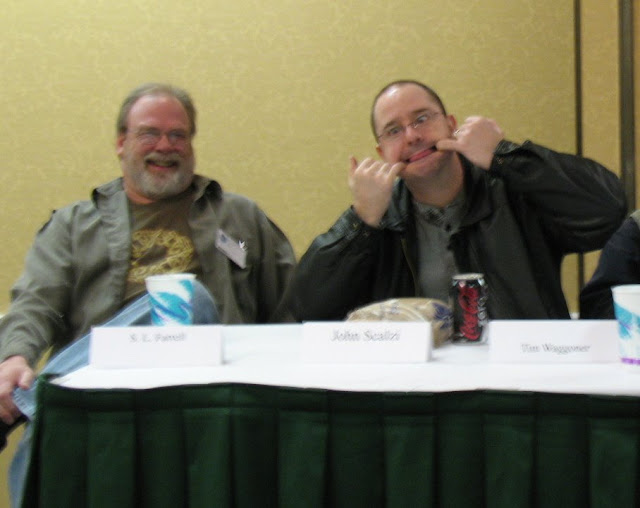 March 2009 – Stephen Leigh: When David B. Coe originally introduced me to Stephen Leigh in passing at WorldCon in Denver, I did a doubletake. I dated a “Steve Lee” in college, and this guy looked nothing like him. This Steve writes awesome novels, contributes to the Wild Cards series, and pronounces his last name more like “lay.” It was great to be able to spend some time with him at Millennicon, getting to know him and hearing him speak on panels.

May 2009 – Steve Eley: Coincidentally enough, only a few short months after Mary hit the big 4-0, it was John Scalzi‘s turn. A bunch of us flew up to Detroit to surprise him at Penguicon — a convention I had never been to before that brought even more fun new faces. The Genre Chicks had just started podcasting our “Tea in Space” program, and I was eager to learn about the new (to me) world of recording oneself. I was thrilled when Mary introduced me to the very gracious Steve Eley, whose voice I was all too familiar with from many hours spent listening to Hugo-nominated stories on Escape Pod. I had a fangirl moment. 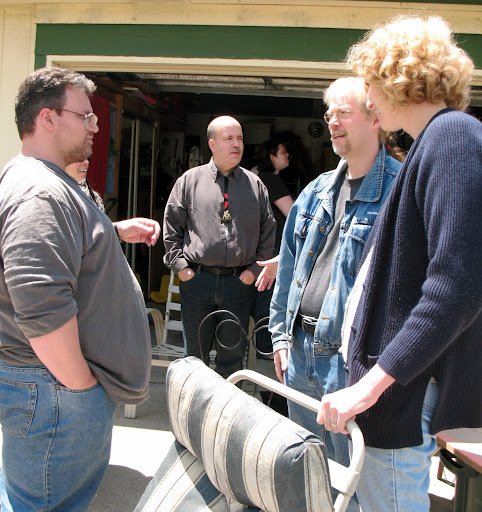 May 2009 – Steven C. Gilberts: Skip ahead two short weeks to Mo*Con, the convention over which I officially reign as Princess Supreme. We had a new venue this year, a gorgeous place that afforded us a lot more wall space to display more art — including that of our artist Guest of Honor Steven C. Gilberts. He and his wife were both soft-spoken and lovely. I’ve seen them several times since now, and I’m honored to call them my friends.

June 2009 – Steve Burns: This blog could have also been called The Year of Mary, as I spent more time with Mary Robinette Kowal than anyone has a right to (and yes, I appreciated every minute of it). She invited me to crash on her couch while I was in The Big Apple for BEA, and she showed me around the fair city when I wasn’t at the Expo. We had great “subway-foo”, as the trains would arrive the second we stepped on the platform. Of course the first time we had to wait on one, Mary ran into someone she knew. She introduced me, and we chatted about his band and the house he was building. He was fun and personable…but Mary’s friends usually are. After we parted she said, “That was Steve from Blues Clues.” I just 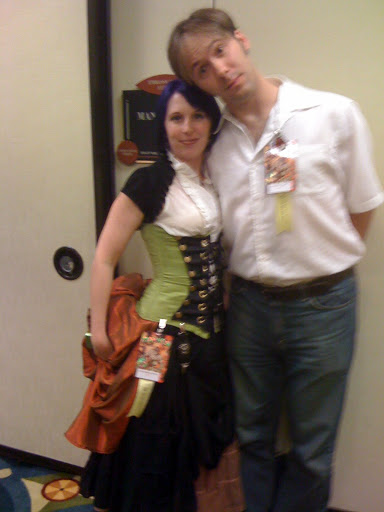 September 2009 – Stephen Segal: In July I was too busy finding soulmates at Necon…shockingly none of whom were named Steve. But September reunited me with my favorite Steves of all time — Stephen Segal, former non-fiction editor of Weird Tales and newly-appointed editor at Quirk Books (congrats, Steve!) who is made of Awesome from his head to his toes. He also drove an hour out of his way to spend some time with me at Horrorfind in MD at the end of September — another con that brought me another round of close friends (of whom I would soon be in desperate need), and I was crazy happy to have Steve on hand.

September 2009 – M. Stephen Lukac: When, at Horrorfind, Lukac turned around and introduced himself as “Steve,” I had no idea who he was. I’d seen him online as “M. Stephen Lukac” and heard of him when Kelli was referring to the “Drew & Lu Show,” but nobody had actually told me a story about him and called him “Steve.” So my initial reaction was: Dear God, not

another one… Of course, by the end of the con we had laughed together, cried together, shared glow-in-the-dark bracelets, and were married for as long as it took the drunk guy hitting on me to go away. I am a very lucky woman. In appreciation of that rescue, I named my character from “Black Hole Sun” (my upcoming Dark Futures collaboration with Kelli Dunlap) Erica Lukac (pronounced “loo-kosh”). You should follow her on Twitter.

October 2009 – Steven Fuller: This Steve was a present from the wayback machine — Fuller was my boyfriend’s roommate in his first year of college. I remember him being so awesome that I wondered if maybe I was dating the wrong sort of fellow. Thanks to places like Facebook, Steve and I have been able to keep in touch over the years. When I was trapped all by myself on Devil’s Night at Sherrilyn Kenyon’s cabin, Steve and I exchanged some great catch-up emails. I told him all about the hell I was going through at my dayjob and he told me to hang in there…and reminded me that I always had a place to run to if it all became too tough to bear. Less than a month later, I ran. Now he’s 45 minutes away. HEY, STEVE!! I owe you a new email.

…and what with one thing or another, 2009 ended. I thought I was done with the Steves. I put off writing the blog. And then I realized…a “year” is 365 days. And mine started in February. There was one more Steve to come.

January 2010 – Stephen Kellogg and the Sixers: Middle Tennessee has Bonnaroo, and D.C. has Shamrock Fest. St. Patrick’s Day and a bunch of bands. I found out about it from Tomo, who was checking out this year’s guest list and Tweeted a song that he dubbed “the perfect theme song for The Breakfast Club”. It was by a guy named Stephen Kellogg. I instantly became a fan. There was another link on the side from the same show, for a song called “In Front of the World.” Looking back on all that this last year has brought me — and what I’ve made of it — it seemed like a perfectly good theme song for me.

2 thoughts on “The Year of Steves”