It all started with an innocent Tweet, as many things this day and age do.

After a long, magical weekend at Horrorfind, a group of us retired back to Kelli & Bob’s house. The weather was beautiful. Worn out as we were, we decided to just sprawl all over the front porch. There were no theatrics or rip-roaring conversations; mostly we just huddled in silence not wanting the weekend to end. From where I sat, leaned up against the railing at the opposite end, I took a picture so that I would remember that moment forever. And I tweeted it.

And so Awesome Porch was born.

At first it was just an inside-joke, a beloved memory, an endearment between friends who already had pet names for each other: Dickie, Tomo, the gypsy, the hippie, the princess, Anubis, Qwee. And then it started being referenced by other people. Greg Hall mentioned it during his interview with Kelli for The Funky Werepig; he wanted to know how he could be a member and get his own nickname. We all laughed — it’s not like we all carry cards or have a dress code or secret handshake or anything…apart from the odd Anubis gang sign…and the stripey socks…

The joke has been made more than once that if Awesome Porch was a reality show, it’d be watched religiously. Not that we’re not already doing our best populating photo albums and creating Facebook Applications and adding each other into Twitter groups and writing each other into stories. It was the pizza place that clinched it, though. Kelli placed our order for delivery, and instead of saying, “Is that the house with all the Halloween decorations still up?” the guy asked Kelli, “Is that the house with the porch with all the awesome people on it all the time?”

It seems we’re now locally famous. How about that?

And then there are the people who end up tripping into a coveted spot on Awesome Porch, achieving a hug and a nickname and immediate entre into the core group.

Meet Chuck, a.k.a. Justin, a.k.a. JP. Kelli even called him Big Mac for a time, because he worked at McDonald’s, but to us it was just Justin. Justin who lives across the street, who has two younger siblings, who likes Buffy & Angel, and who has someone else’s kidney. Justin’s a good kid. We like Justin.

The next day, when Justin walked back over to prove to us all that he was alive and well, he got quite the ribbing. I was in the living room, listening to the porch through the open front door as they decided what terrible teasing nickname we could give Justin that would torture him for the rest of his life.

“Chuck!” I yelled through the screen door. It was simple, really. Obvious. The porch laughed. And so Chuck was born.

Last weekend, Kelli bought a new toilet seat. As penance, Chuck had to install it. Click on the picture below to forward through the photographic montage.  We’ve still got the old one — I think we’re all going to autograph it and bestow it upon him at the next Awesome Porch gathering. 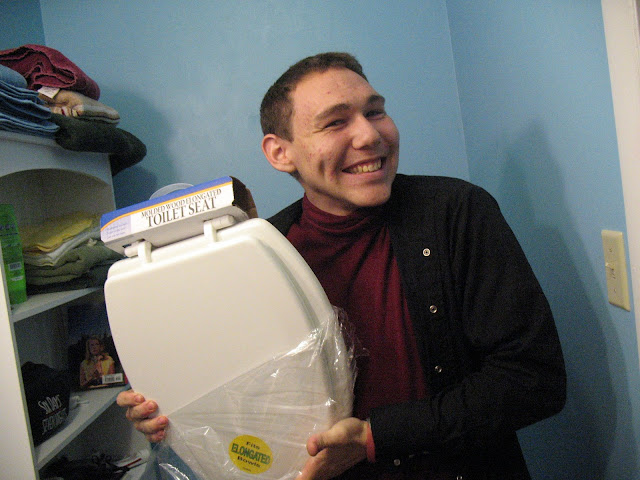 Tossing your cookies until you’re passed out on the bathroom tile: all your pride & humility.

Getting a nickname on Awesome Porch: priceless.

Have you got what it takes to be a member of Awesome Porch?

One thought on “What It Takes”