This entry would have happened earlier, but as many of you know (how many mothers do I have on Twitter?) I came home from Atlanta and promptly got horribly sick. In the last week I’ve caught up on a lot of TV…and I relived Dragon*Con. I searched YouTube for recordings of the parade. I posted all my pics to my photo album, looked through Chris’s and Judy’s, and waited patiently for the fan photos that tagged me on Facebook (okay — which one of you thought I was Sherri’s niece?). I unearthed the famous Thriller video. And I made notes. There’s no way I can ever write a con report that would do this year’s Dragon*Con justice. Last year, I did a top-ten list. Hey! A top-ten list sounds like an awfully good idea, doesn’t it? Let’s start with number one:

1.)  Wait…it’s OVER?!? Thirteen years ago, my boss at Waldenbooks dragged me to my first science fiction convention — a little place called Dragon*Con. (I say "little" because it was only in two hotels: the Westin and one other.) One of the first hard-and-fast realizations that hit me was the One Universal Truth of Dragon*Con (apart from: "You have to go down to go up") was that it was impossible to do everything. There was just no way. You had to pick a few authors you really wanted to meet, a few stars you really wanted to see, a few panels you really wanted to attend, and everything else was a bonus. In fact, over the years I found that the more I didn’t plan, the more fun I had. Bonus.

A few years ago, the dynamic changed. I started running with Sherrilyn Kenyon’s crew. Derek got me invited as an official guest so that I could moderate the "Hour With Sherrilyn Kenyon" — a panel that inevitably packed the Goth track room to its gills every year. The Dark-Hunter Companion hit the streets. I started walking with the Dark-Hunters in the parade. Derek asked me onto other panels. I became friends with some of the staff. They recognized me in the green room. Even after all that, I was surprised when I got my schedule emailed to me to find that I had four panels, an autograph session, and a reading. I suddenly felt like somebody, and it was a little scary.

I shifted my priorities a bit and concentrated on the one thing I wanted to do — hang out with my roommates Chris (Kit) McCormick and Leanna Renee Hieber. Kit and I have known each other since I was 10 (see also: The High School Reunion essays). Leanna and I met a few months ago at BEA, which seems ridiculous even as I type it. Our souls have known each other for a lot longer. This was her first Dragon*Con, and the first time I’d been able to spend quality time with Chris in forever and a day. My first priority was them. My second priority was my schedule. Everything else would be a bonus.

Only…when one is in the parade, one doesn’t get to see the parade. When one is required to speak on panels, one cannot stand in line to attend any others. When one’s autograph session runs an hour long, the Walk of Fame shuts down before one is able to get over there. I hoped I would run into random celebs in the green room or at various parties. Other than Paul McGillion and a brief Anthony Daniels sighting, the only famous people I got to hang out with were the ones I already knew. Not that there’s anything wrong with that. But at a con the size of Dragon, one does look forward to making impressive new friends. 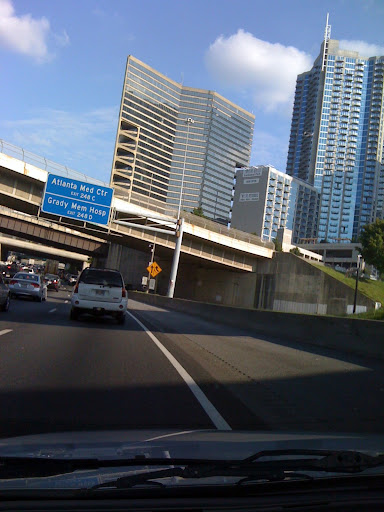 At the very least, I walked the Art Show. I bought one piece of art from a new artist. I saw both Exhibit halls and bought both a corset and a Buffy skin for my iPhone (thank you, Pendragon and Dark Horse, respectively). I never saw Felicia Day or William Shatner. I never got to tell Jason Momoa my funny story. I did not have my picture taken with the Doctor Who costume crew (though we did catch a great 10th Doctor on the first day). I did not participate in the world-record-breaking Thriller Dance. And I did not set foot in the Walk of Fame.

The second I drove up to the Atlanta skyline I took a picture, savoring the moment of anticipation because I knew it would be over sooner that I wanted it to be…and I was right. I had prepared for MONTHS, and here it was, and we were going to have a fabulous time. And we did. A time beyond measure.

The part I didn’t count on, however, was that because I had left so much undone, up until yesterday I didn’t feel like I had actually gone to the convention. It was a really weird feeling.

Especially because my convention experience was in absolutely every other way AWESOME.