Number Three of my Dragon*Con Top Ten:
Meeting Paul McGillion
(or: Earth to Atlantis; come in Atlantis)
I mentioned earlier that due to my busy schedule I didn’t have many celebrity sightings this year – celebrity, of course, being someone of esteem that I don’t already have in my phone or on my Christmas card list. The two folks I caught a glimpse of who qualified were Anthony Daniels (C3PO from Star Wars) and Paul McGillion (from Stargate: Atlantis).

Now, there’s a whole story that revolves around the crew of Stargate: Atlantis, a story I promise to tell on the day I meet Jason Momoa and not before. Suffice it to say that it culminated in Janet’s and my hard & fast goal to introduce ourselves to every celebrity within arm’s length, no matter how intimidated, scared, or fangirl we might be.

So there we were in the Green Room. It was late. I was getting punchy. Everyone else was well on their way to being several sheets into the wind. Carl–the Green Room’s very tall bouncer whose job it is to bellow “Last call!” to no objections—offered me some high-octane vanilla cognac from his private flask. Not sure what Mike Lee was drinking, but he was loving the world and tipping well, so it must have been good…but not so good he wasn’t jealous of Carl’s favoritism toward women in low-cut dresses. 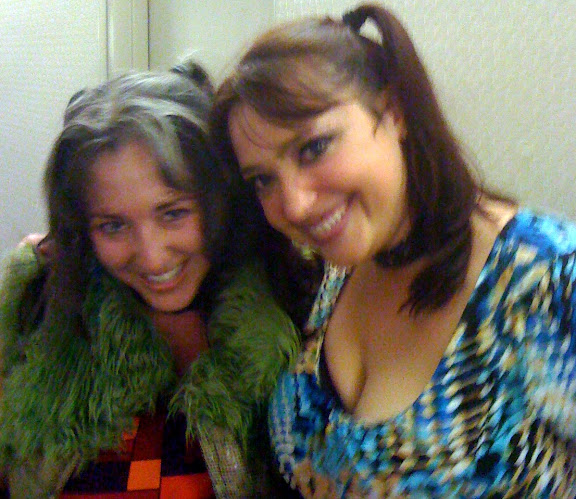 I had befriended a fabulous artist named Marrus (pictured right), whose friend explained how creeped out he was that I looked just like Marrus twenty years ago…and still looked quite a bit like her now, plus a few pounds and inches, and minus the frosted hair. We laughed and joked and carried on and yelled plans for the future in each other’s ears. See, once it gets packed and the evening wears on, the Green Room isn’t so much a haven as it is a really crowded bar with great snacks and free drinks. At first you only have to talk above the background music, the beer pong game, and the masquerade…later you have to yell above all the other people trying to be heard above all those other things too.

I followed Mike to the bar the first time as an excuse to walk by Paul McGillion. After like the sixth or seventh time, as folks were starting to head to other parties in anticipation of getting kicked out, I hooked Mike’s arm and dragged him slowly toward the door. I swear he said goodbye to everyone—which included bestowing a giant hug on Paul McGillion. Now, I had no idea Mike knew Paul. For all I know he probably doesn’t. But I stood there and smiled, and courteously after Mike said goodbye, Paul turned to me. And this is what happened.

Lee: (sticks out her hand & shouts) I’m Alethea Kontis! It’s nice to meet you!
Paul: (cups his ear) What!?
Lee: (leans in) ALETHEA KONTIS!
Paul: (smiles) Thank you! Thank you very much!

I tried to say something else just as he tried to say something else, and we both leaned in to scream it again in each other’s ears only to stand there in awkward silence. Paul then kissed me on both cheeks and said, “Have a good night!” Embarrassed, and feeling like I had just had a conversation with someone via tin can and string, I dragged Mike out the door after Janet, Leanna, and Chris.

WHAT had just happened? I touched my cheek. Paul McGillion had kissed me. Does it matter what happened?

The next day I stopped by the Sherrilyn Kenyon booth to tell my story to Eddie and Erin. They were just as confused as I was abou8t what had transpired. “What exactly did you say again?” Eddie asked.

“What exactly did you say?” said Eddie.

“I’m Alethea Kontis,” I said slowly, enunciating every syllable. There was a pause, and then we all started laughing. My cheeks flushed all over again. “He thought I was saying, ‘I love you,’ didn’t he?”

“That, and he probably thought you were very drunk,” said Erin.

The next time we meet, I have a feeling Paul will get a kick out of this one.