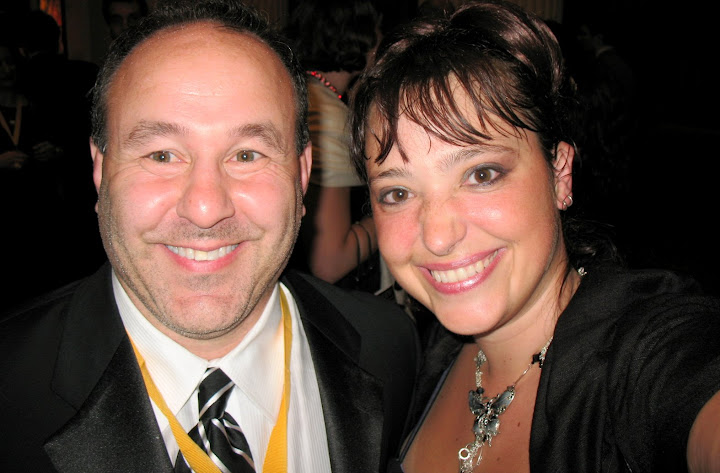 Alfred & The Princess at the 2009 Audie Awards

Alfred Martino is an author very near and dear to my heart–not only because he writes engaging sports stories aimed at reluctant middle grade readers, but because he is the co-founder of Listen and Live Audio. At this most recent BEA, Listen and Live’s production of L.A. Meyer’s Curse of the Blue Tattoo swept the stage with a total of three Audie Awards. In between champagne toasts (and meeting Neil Gaiman, which I *promise* I’ll get to, Mom!), I took a little of Alfred’s time to ask him about his life, his adventures in audiobook publishing, and his newest book, Over the End Line.

Alfred Martino is an author very near and dear to our hearts here at Ingram–not only because he writes engaging sports stories aimed at reluctant middle grade readers, but because he is the co-founder of Listen and Live Audio. At this most recent BEA, Listen and Live’s production of L.A. Meyer’s Curse of the Blue Tattoo swept the stage with a total of three Audie Awards. In between champagne toasts, I took a little of Alfred’s time to ask him about his life, his adventures in audiobook publishing, and his newest book, Over the End Line.

Alethea Kontis: Your Web site pictures show you wrestled as a kid…were you a jock in school? What other sports did you play?
Alfred Martino: Actually, I’ve been a jock all my life. In high school, I was captain of my varsity wrestling team and played varsity soccer. I also wrestled in college at Duke University. At various times, I’ve also played organized (and pickup) football, street hockey, basketball, beach volleyball, tennis, etc. I pretty much spent my youth outside playing some kind of sport or game (especially Frisbee, skateboarding, stickball, step ball, etc.) with friends and neighborhood kids. I still try to do that now on the weekends.

AK: What was your best subject in school? Your worst?
AM: I graduated from one of the best public high schools in the country (Millburn Sr. High, Millburn, NJ), but the curriculum was very straightforward, with typical classes like, English Literature, American History, French, physics, chemistry, etc. To be honest, while I enjoyed, say, AP Biology quite a lot, I would have preferred to learn about economics, business principles, politics, and other similar subjects. Even after having received my college degree from Duke and my MBA from The Marshall School of Business at the University of Southern California, I feel the majority of my business and political understanding has come from my own research and reading. And, generally, I believe most Americans (especially teens) would be better served learning how to run a small business–even something as simple his or her own personal finances–as well as recognize how the American political system, both locally and nationally, affects their day-to-day lives.

AK: You’re the co-founder of Listen & Live Audio — what was the impetus to start an audiobook company?
AM: I didn’t want to work for somebody else. It’s as simple as that. I wanted to control my own destiny. I wanted to benefit, or suffer, financially, based on my ability to run an entrepreneurial venture. The audiobook industry happened to be in its infancy at the same time I was graduating from graduate school. The two merged.

AK: Listen & Live published the audio versions of both Pinned and Over the End Line. How much direction did you give in the production? Were you a tyrant?
AM: Actually, I gave no direction for either audiobook. I have always believed that what makes an audiobook a unique, and very exciting, entertainment product is that it combines the best of two worlds: The author’s words, and the narrator’s interpretation of those words. I did not sit in on either of the recording sessions. The only suggestions I gave to the narrators were for pronunciations of places and people’s names.

AK: Do you ever get sick of this crazy publishing biz?
AM: Every day (sometimes). It is not an easy business to be involved in and, of course, the nation’s economic conditions don’t help. However, I work very hard and am eternally optimistic, so I usually end the day enjoying the challenge and feeling good about the direction Listen & Live Audio is moving in. Plus, we recently won three Audie Awards for one of our titles, Curse of the Blue Tattoo. Receiving that kind of industry recognition makes it all worthwhile.

AK: Who’s your favorite wrestler?
AM: My favorite amateur wrestler is, of course, Dan Gable. Gable is really the name that is most associated with the sport, as both a competitor and coach. Throughout his high school and collegiate career, he lost only once–in the national finals his senior year at Iowa State, in what is generally considered the greatest upset in amateur wrestling history. He later went on to win a gold medal at the 1972 Olympics in Munich. The stories of Gable’s determination and willpower are legendary. As far as the most talented American amateur wrestler ever, I lean toward John Smith, an Olympic gold medalist in ’88 and ’92. I watch his matches on YouTube and still marvel at his technique.

AK: Your books target a young adult male demographic we like to call “reluctant readers.” Do you ever get fan mail from these readers?
AM: I do get e-mails and letters from students (both boys and girls) who have read Pinned. I appreciate any comments that readers make, but I am particularly touched when they’re from a boy who, typically, says that he never reads or doesn’t like school, but decided to try my novel and really enjoyed it.

AK: Which sport will you be writing about next?
AM: My third novel, which I am halfway through, is about a girl who is on her high school’s boys’ wrestling team (and her older brother is the team captain). Wrestling is, perhaps, the fastest growing girls’ high school sport. In many states, in fact, there are wrestling leagues made up entirely of girls’ high school teams, as well as post-season state tournaments run exclusively for girls. As a former wrestler, I am fascinated when I speak with girls who wrestle because they are as dedicated, and love the sport as much, as any guy. I am also intrigued with the obstacles that these girls invariably have to overcome from parents, fellow students, friends, and school administrators (Typical questions: Why do you want to do ‘that’ sport? Are you lesbian? Or do you just like touching boys?), in order to compete.

AK: If you could be any superhero, who would you be and why?
AM: I was a huge comic book fan when I was younger. In fact, I still have quite a collection from the 1960s and 1970’s. There are two characters that I loved: Iron Fist and Nova. You’d have to be a comic book aficionado from those decades to know about these two, but suffice to say, both fulfilled all the dreams and aspirations for superpowers and incredible strength that a young New Jersey kid like me wished so dearly for.