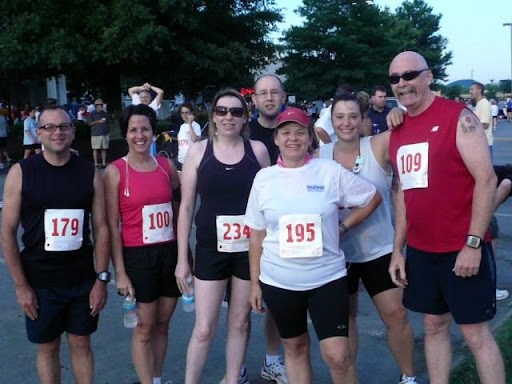 I barely slept the night before my first 5K…you know how it is. I was up at 3am and 4am, worried that I’d sleep through my 5am alarm — especially since I was in the middle of a writing retreat at Sherrilyn Kenyon’s cabin (which was closer to the race than my house). For all that I had prepared I had forgotten both the shirt I had planned to wear and my hair sticks (notice I have one hair stick and one Papermate pen) and the chain for wearing my car key around my neck (thank heavens for sports bars), but I remembered my shoes and my iPod, and that was the important part.

I was crazy early and got a good parking spot, found the bathroom, checked out the YMCA, and walked in circles around the parking lot to warm up while I waited for everybody to show. All the Ingram folks were to meet at the big sign at 6:30 (the race started at 7:00). Kevin found me first, so we hung out at the sign and chatted as Sam and Alison, Robin & Amy and their husbands, and Ben trickled in.

I kept doing stupid stretches to a.) look like a big shot and b.) keep myself from fidgeting and c.) because I probably needed it. So I’m folded in half touching my toes by the sign, and I notice that there’s quite a bit of clover interspersed with the grass. Back In The Vermont Days, I used to spend hours in the field across the street from our house searching for four-leaf clovers. "Wouldn’t it be funny," I thought, "if I found a four-leaf clover right now?" And then I did. Within like 30 seconds. I’m not kidding. It’s pinned to the top left corner of my number in that picture. I pressed it when I got back to the cabin. Are your surprised? Me neither. 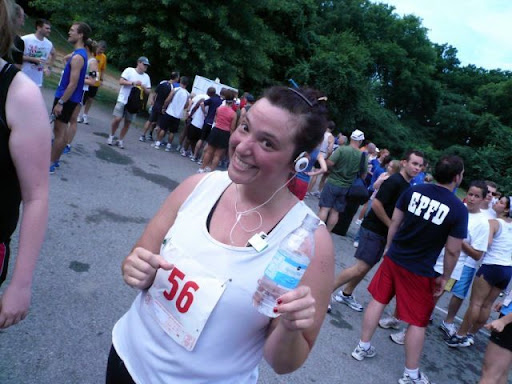 I took a friend’s advice and started the race way in the back, so I wouldn’t be run over by the Serious Athletes. (Instead I got run over by ladies with baby carriages.) So I didn’t cross the START line the minute the gun went off, but I had a nifty chip on my shoe that would mark my time from the point that I did, which was cool.

My only goal was 45:00. I figured it would be a miracle if I finished that fast. For the last half of the race I think I joggled my iPod between the Beach Boys’ "Surfin’ USA" and "Let’s Start a Riot" by 3 Doors Down. The former was my running song; the latter was my walking song. I just kept at it, back and forth. I skipped the water when it was offered (it was really a beautiful day and not nearly as hot as it should have been), and it was nice to be cheered on by perfect strangers. Kevin was waiting for me at the FINISH line with a bottle of water and a smile. The time on the big clock said 46:09. I figured I was maybe a minute back at the START line…I could maybe pull off beating 45 minutes. So when the times were posted and it said 43:53 by my name, I had to read it three times before it sunk in. WOOHOO!!!

I was the slowest person on my team and at the bottom of the list in my age group, but I totally don’t care. I did something I never thought I’d do, and I had a great time. Even better — I’m totally looking forward to the Christie Cookie 5K in September. I can’t wait to kick my own butt.