"Oh, I’m so glad she’s pretty. Next to being beautiful oneself–and that’s impossible in my case–it would be best to have a beautiful bosom friend."
~Anne of Green Gables, by L.M. Montgomery 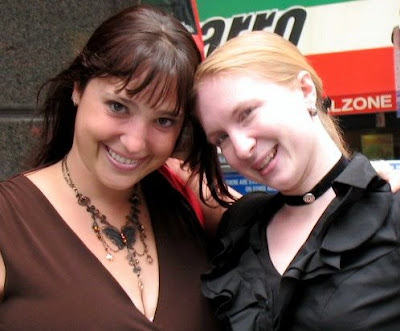 My feet were killing me. I lost a ridiculous amount of sleep because my left ankle in particular kept waking me up. Mary had fixed me a cold, Epsom salt foot bath when we’d gotten home from dinner with Ellen and Esther, but instead of dumping it out I had left it by the bedside. I soaked my feet when I woke up at 3am, and then again at 7am. I needed to make a decision — sneakers with arch and ankle support…or the fancy dress and cute shoes I had planned on? I was still doing business — Brooke and Tim at Dorchester had invited me to brunch that day. I know they love me no matter what I’m wearing…but if I was going to show up at the convention, I needed to Own It. I had packed the dress and the shoes. I could carry my sneakers in a tote in case of dire emergency. I could do this. I could hack it.

I walked as little of the floor as I could, saying my goodbyes…but I didn’t last very long. Finally I splurged on a seven-dollar frappuccino and sat down at the large tables by the door. I texted Tim to confess my surrender, in case they wanted to head out early. Even sitting still I managed to run into a friend who plopped down beside me and helped me pass the time. Brooke and Tim breezed up and I introduced them. Tim promised me a cab to Times Square. I love that man. Brooke sort of winced slightly, and I braced myself for her news.

"I hope you don’t mind…we’ve invited someone along to brunch."

"Remember that author we were talking about for a Genre Chicks interview? Leanna Renee Hieber? I sold you her book The Strangely Beutiful Tale of Miss Percy Parker." I did remember. I really love that title. "I didn’t think you’d mind — you’ll totally love her. She’s just like you."

I’m not sure about you, but I hear this sort of thing a lot. Sometimes it turns out to be true. Sometimes it doesn’t. Brooke knows me pretty darn well, so I can trust her judgment. But she’s also a pretty darn good saleswoman, which left wiggle room for doubt. Either way, there was no way I was changing into those sneakers any time soon. I was walking back into the windy NYC spring day with my silky Marilyn Monroe handkerchief skirt, and I was going to remain "on" for a few more hours. I could hack it. Besides. This Leanna chick could turn out to be cool.

Three-quarters of the way into one of the most amazing brunches of all time, Leanna and I had made it through Goth-wear, Harry Potter, our mutual affection for Alan Rickman and Zachary Quinto, some OMG DOCTOR WHO! fangirl squeeing over David Tennant, comic books, and the Nick Cave anthology. We even exchanged websites for quality bookmark printing. Sometime in the middle of dissecting Star Trek 2009 (which we’d both seen twice), we started finishing each other’s sentences. There weren’t a whole lot of breaths taken, unless we were stuffing our faces with the delicious offerings from Ruby Foo’s. Tim and Brooke spent most of the brunch watching our rapid-fire discourse with fascination.

Tim leaned in to Brooke. "I think maybe we did a little too well."

We ordered dessert, despite being stuffed, because hello, it’s dessert. Brooke and I opted to share some kind of rhubarb crumble, Tim got a big fat chocolate cake (Tim doesn’t like to share), and Leanna went with the pineapple sorbet. So when the waiter brought a huge slice of Red Velvet cake to the table, we all looked a little confused. He apologized, and then brought the correct desserts. After we’d been served, he brought the slice of Red Velvet back over.

"My mistake," he said. "Since it’s already been plated, you’re welcome to it." He slid it onto the table between me and Brooke.

"Go on, then," Leanna drawled. "Pass me some of that bleeding armadillo groom’s cake."

From Doctor Who to Steel Magnolias in under 10 seconds, and we never missed a beat. That’s when I knew…it was true love.