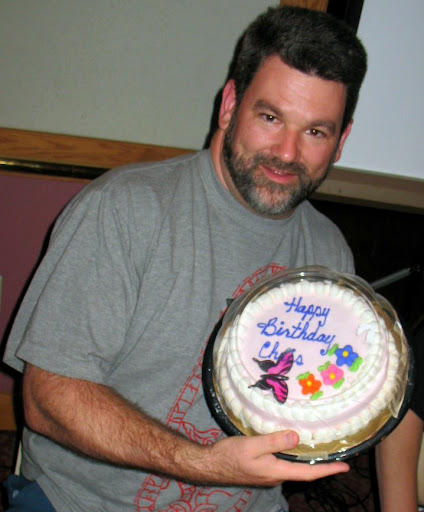 An icon in the pop culture world for his work on movie tie-ins and in the Buffy the Vampire Slayer universe, the true gems of Chris’s bibliography are his original novels. In Strangewood, The Boys are Back in Town, and the just-released Wildwood Road, Chris takes the reader back to a time when a spinetingling, page-turning book was the perfect mixture of engrossing characters and a tale well told.

Genre Chick Alethea Kontis had the chance to chat with Chris about his creations, his loves, his dreams, and what makes him afraid …

Alethea Kontis: How different is the experience of writing the tie-in books (ie: books in the Buffy universe) from writing your original novels? Does one influence the other? Which do you enjoy more? (tough…I mean, it IS Buffy…and who doesn’t like Buffy?)
Christopher Golden: Writing originals is always going to be the heart and soul of what I do. But I often say that it’s like having two minds to work with, two personalities. The grown up me writes original novels, and the kid in me writes the tie-ins, because it’s so much fun to take something you have a passion for and run with it, to play with someone else’s cool toys. It’s a completely different discipline, however, and unfortunately some people don’t take tie-in work seriously.

There are writers who think it’s all hack work, that it’s beneath a “real” writer. Bull. But if you don’t approach it with the intent of doing your best, if you think you can just dash it off and it doesn’t mean anything because it’s a tie-in, that IS hack work. You have to try to make the characters real for people, to get into the world and make it real, and that takes a certain attention to detail and a feeling for character. Writing original novels is much more challenging and much more rewarding, but doing an effective tie-in based on a property that you love can be a total blast.

AK: In the new introduction for Strangewood, you tackle the dreaded question: “where do you get your ideas?” So…to make things that much more painful, where did Wildwood Road come from?
CG: Ah, but that’s a simple one, this time. Wildwood Road was a dream I had. Seriously. The entire first few chapters and many of the bits and pieces of the rest were all something I dreamed. The couple who are the main characters are significantly autobiographical, but the story was a dream.

AK: I have to compliment you on your fantastic musical taste. (I can’t listen to John Mayer’s Room for Squares album anymore without thinking about The Boys are Back in Town…not a bad thing!) How much does music influence what you write? Do you listen while you write?
CG: I almost always have music on. Right now it’s Los Lonely Boys, but I like all kinds of things. Classical. Blues. Jazz. Even Celtic music. Most of what’s in my CD collection is pop or rock or that kind folk/rock. Some R&B. Music doesn’t necessarily influence what I write unless it’s a CD that’s really gotten under my skin, the way some of the lyrics on Room For Squares did. Sometimes, though, I’ll put on something for the mood of what I’m writing. For instance, if it’s set in the 40s, I’ll put on Sinatra.

AK: There’s been buzz in the book world about how horror as a genre is on the rise again. What do you think about that? How do you think horror has changed over the years?
CG: Well, the last few years have clearly seen a massive upsurge in the popularity of horror at the cinema. Even the [worst] horror movies are a home run these days. Which is not necessarily good. That’s what killed horror in publishing all those years ago. Horror was so successful that publishers put out a bunch of crap to capitalize on that success, eventually causing readers to think a lot of horror was crap, and the bottom fell out. I hope that doesn’t happen at the movies.

Meanwhile, though, I think publishers are taking horror more seriously than they were a few years ago. Unfortunately, there is still a dearth of publishers willing to make a big deal out of horror. Film studios put out horror movies with a big marketing splash, and we almost never see that with publishers. As many horror titles as some companies may put out, there is too much contentedness with the size of the present audience and little to no effort to broaden that audience. At the end of the day, that’s good for the hardcore fan base, but bad for most of the writers slogging in the trenches.

I hope that they continue to make great horror films and that publishers continue to expand what they’re doing with horror. I think we’re headed in the right direction, but it would be nice to get there faster, to have a proactive publisher who is actively seeking to make the next big thing in horror. Some of the new wave of guys have fantastic buzz, but that’s just preaching to the converted. The buzz doesn’t reach the people who The Da Vinci Code because their babysitter or their co-worker told them how fantastic it was. Publishing is largely a self-fulfilling prophecy. Yes, you have to start with a great book. But each year there are a number of books that fit the bill. Combine those books with a serious marketing campaign, something with muscle, and with just a few breakout books, horror could be returned to its glory days. It would take a commitment both in spirit and in cash from the publishers, however. So I have no idea if that will ever happen.

AK: If you could be any superhero, who would you be?
CG: Angel. Not the later, grim, Archangel, but the original Angel of the X-Men. Not because he was rich or ridiculously good looking, but because of the wings. It would be extraordinary, I think, to fly like that.

AK: What scares you? Have you ever seen a ghost?
CG: I’d love to see a ghost, but never have. Not sure if they’re real, but I’d like to think they are. What am I afraid of? Dying. Really I could give you a list of all of the others, but at the bottom of them all would still be dying. I like living. I don’t want to go.

AK: How have libraries influenced you and your work?
CG: I love libraries from the one in my school as a kid, where I first got interested in reading, to the one in my town where the librarian, Beth Gallaway, had a teen reading group that I went to speak with one night. I’ve done presentations at several libraries in the area–and last year I had to turn down a trip to speak at libraries in Hawaii, which absolutely killed me to have to do. Whenever I go speak at a library, I’m always amazed at how enthusiastic the librarians are, especially the ones who work with teens and young readers. I recently did an ALA event in Boston, just popping in for a couple of hours to promote my new teen horror series The Hollow, and I can’t tell you how much of a comfort it is to be in a place with so many people who love books as much as–or even more than–I do.