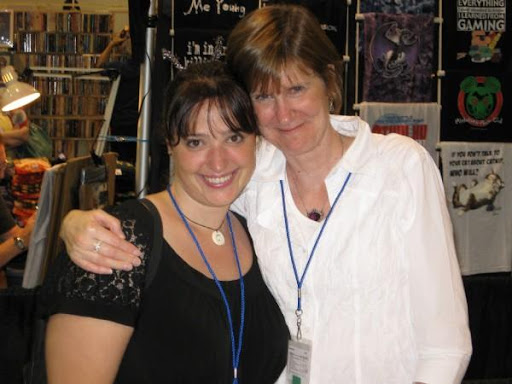 If you’re a fan of Anne McCaffrey, you should definitely have Sharon Shinn on your shelf. The award-winning author is best known for her tales from the angel-filled land of Samaria–a decadent series that mixes science fiction, fantasy and romance better than rainbow sherbet. More importantly, she brings a valuable wealth of much-needed, butt-kicking heroines to the ranks of the genre. The most recent book in the Samaria series, Angel-Seeker is out in paperback this month.

AK: What brought you back to Samaria after a such a long hiatus? (We’re all so very glad you did.) Do you plan on staying for a while?
SS: I hadn’t actually planned to come back to Samaria, but more than half the fan mail I got was from people expressing the hope that I would. For a long time, I had had the basic idea for the story of Angelica—someone on board the spaceship, fixing circuitry, but believing the experience was a dream—so I figured, well, why not write it? How often in your life do you have people pleading with you to tell a story only you can tell?

For the moment, I think I’m done with that world. I’m in the middle of writing a new four-book series (the first one,Mystic & Rider, comes out this spring), and that will keep me busy for a while. But I have learned that new ideas can crop at any time. And Samaria has the power to draw me back in . . .

AK: Your books are such a unique amalgam of fantasy, science fiction and romance–did you start out aiming for one genre over the other? How would you classify them?
SS: I guess I always figured I was writing fantasy with a healthy dollop of romance. It surprised me at the beginning that reviewers sort of made a fuss over the fact that I had such strong love stories in my books. I think Anne McCaffrey, Robin McKinley, Patricia McKillip, and Joy Chant were all way ahead of me in writing science fiction-romance, so I always felt I was just following in an established tradition. (I think it’s become even more established in recent years, with authors like Catherine Asaro and Mercedes Lackey and others really shaping the field, and the whole “paranormal romance” genre taking off.)

Actually, I was basically just writing what I would have wanted to read. My goal was to write what Georgette Heyer would have written if she’d turned to sf/f. I can’t imagine my books being marketed as anything except science fiction/fantasy—but I do know that I have some crossover romance readers. And, after all, why should the genres be segregated? It’s more fun this way.

AK: Woven into this series is a beautiful message about the importance of faith. If you lived in Samaria, would you want to know the truth about God?
SS: Good question. I think I would. I think it’s better to know the truth, even when it’s hard. Although I hope that the books show there is always another mystery even when it seems the truth has been discovered. As Alleya’s long conversation with Jovah teaches her in Jovah’s Angel, there are rarely definitive answers about faith. The Jovah they have believed in on Samaria might be a spaceship, but there is the potential that a greater god still exists. It’s impossible to know for certain. Which, of course, is where the concept of faith enters in.

AK: Which of your characters do you identify with the most? (Alleluia is my personal favorite…)

SS: There’s a fan website that includes a quiz called “What female Samaria character are you?” When I took the quiz, it said I most identified with Miriam. In truth, she’s probably the one who is least like me. Alleluia is definitely closer to my personality—bookish, reserved, and uncomfortable in the limelight! I also have a dash of Susannah in me and like to be surrounded by close friends and family. I don’t have Edori sensibilities, though, and never want to sleep with ten other people in a tent or a small room.

AK: One of the best aspects of your books is your strong female characters. Who were your female heroes as a child (real life and/or fiction)?
SS: My mom is certainly a role model of a strong woman. She was divorced young and raised three children more or less on her own. Actually, my family is filled with strong-willed women—my aunt, my grandfather’s cousin, my great-grandmother—so I’m sure that’s where a lot of it comes from.

I’m trying to think of specific fictional role models that influenced me…Lois Lane, maybe (though she does have to get rescued a lot). Supergirl. These days, of course, Buffy. Rosalind Russell in “His Girl Friday.” Katharine Hepburn in anything. Elizabeth Darcy. Scarlett O’Hara. Jane Eyre. Women who don’t sit around quietly and wait for things to happen and don’t simply acquiesce when the world is not to their liking.

In my own books, especially the angel books, what I’ve tried to do is create a male protagonist and a female protagonist that are both absolutely essential to the plot. If Susannah isn’t on the spaceship when Gaaron is singing over Velora, all of Samaria is lost. They’re both intrinsically necessary, and I try to make that true in all my books. None of my women is just the star’s girlfriend.

AK: If you could be any superhero, who would you be?
SS: That’s easy! I’d be Triplicate Girl, who tragically became Duo Damsel when one of her personas died. She could split herself into two (or three) parts and go off and do entirely different things, then reintegrate herself into one person. How many days have I wanted to be able to do that! What a different and more productive life I would be leading even now!

AK: What was your favorite book as a child?

SS: Toss-up. Carol Kendall’s The Gammage Cup or Frances Hodgson Burnett’s A Little Princess. Or maybe Jane Langton’s The Diamond in the Window. I still reread each of them from time to time—usually once a year for The Gammage Cup. I gave it to my nephew a couple of years ago for Christmas and he loved it.

AK: Music plays a very important role in the series–are you musically inclined?
SS: I grew up with music and have always loved singing, but my talents in that area are pretty ordinary. About half the people in my family are musical, so at family get-togethers we’d sing camp songs or folk songs or Christmas carols in multi-part harmony while my mom played the piano and my cousin played the guitar. Our signature songs are still “Do Lord” and “Silent Night.” I sang in choirs in high school and college, and for a while sang in a community choir, but have sort of given that up in recent years. And I miss it! I was singing in a community choir rendition of Mendelssohn’s “Elijah” while I was writing Archangel, and that clearly inspired the choral music performed in that book.

AK: How important have libraries been to you and your work?
SS: There have been so many points in my life when libraries have been absolutely essential. When I was growing up, the bookmobile came every Friday to the fire station just a block from my house, so I could walk there and check out books. Not only was the bookmobile air conditioned (our house was not), but it was filled with books! I still remember how that place looked and felt. Meanwhile, we went to the main library on a regular basis, and I always checked out an armload of books. And read them all one right after the other.

For many years, when I moved to different cities, one of my first tasks would be to locate the library and get a library card. This was always accomplished within the first week. When I moved to the house I live in now, one of the things that drew me to the neighborhood was that the library was literally a two-minute walk from my door. These days I tend to buy books more often than not, so I don’t use the library quite as often, but I love to know it’s there.

For me, libraries have always been the secular versions of cathedrals. In them I have always found sanctuary—serenity and solitude—and answers to all kinds of questions. I cannot imagine that I would be the person I am today if I hadn’t had access to libraries all my life, and read every minute that I could.